I’ve just eaten for the second time at Raithaane in Saugal, Patan, and hope to do so again before long.

The restaurant is a little hard to find at first. It’s about 300 meters east of Patan Durbar Square. The best route there is a walk through small alleyways.

Raithaane serves tasty, inexpensive, local food from many regions of Nepal. It’s all fresh and organic. As our waiter explained they use tomatoes only where it’s appropriate to the particular dish, not tomato sauce on everything.

Coffee Tea & Me serves up an international menu, including excellent coffee, to what appears to be an entirely local crowd.

That’s due in part to the fact that it’s tucked away down a small alley. That alley slips in between some souvenir shops just 50 meters north of the Bhimsen temple at Patan Durbar Square. You need to know about it in advance, not just wander in.

The little restaurant has great food, served in an unpretentious style. There are only seven tables, with low seating for those seeking a traditional style, and higher ones for anyone with extra long legs.

Each time I’ve gone in, I’ve relied on Ruby Maharjan, the chef, to suggest what was good that day. One time I had a chicken noodle dish with fresh vegetables, which was delicious, just spicy enough. Another time I had a river-caught bachwa with a wonderful sauce and accompanied by a nice veggie salad. As you can see I couldn’t wait for a photo the way a good food blogger would.

The room layout is enchanting, with walls painted in modern patterns inspired by traditional Nepali and Chinese designs. The painting of Buddha portrayed on the wall is the center of attraction.

There are many other excellent places to eat or have coffee in Patan. They offer not only good food, but fascinating old architecture, charming courtyards, and relaxed atmosphere. I single out Coffee Tea & Me because it gets everything right in a minimalist and very affordable way. It also happens to be close to where I’m staying, just north of Durbar Square.

The Bhimsen Temple landmark, by the way, is located at the northern end of Durbar Square. It’s dedicated to the god of trade and business.

The current temple was completely rebuilt in 1682 after a fire, then was restored after earthquakes in 1934 and 1967. It’s under repair once again, from the 2015 quake. It has an unusual, rectangular, but non-square footprint.

In the photo you can see the old and new in the building itself, in its supports and scaffolding, in the clothing of passersby, and in the cotton candy and cola sales.

The conference in Taipei a little over a week ago was really two-in-one. It combined “Museums in Everyday Life” with “Educational and Communication Technology Transforms the Future.” The museum part meant that we had tours of several local museums as part of the conference activities, rather than requiring one to skip sessions.

At the end, there was a wonderful dinner with Taiwanese specialities at Qingtian 76 (also see), a Japanese-styled building that had once been the residence for National Taiwan University professors and is now an excellent and charming restaurant. 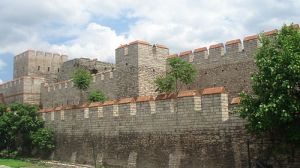 Last Monday I walked along the Walls of Constantinople, then returned along the Sea of Marmara. It was a beautiful day, with great views in every direction.

The stone walls were built in 324–336 to protect the city of Constantinople (née Byzantium) after its founding as the new capital of the Roman Empire by Constantine the Great. It was the last and one of the most complex fortification systems built in antiquity. Gunpowder began their demise, but it was the large number of Ottoman invaders that caused the city to fall to a siege on May 29, 1453.

Nevertheless, the walls had protected the city for over 1100 years, making them the most successful ever built. Even after the fall of Constantinople, Ottomans under Sultan Mehmed II added to the fortifications by building the Yedikule Hisari (Seven Towers Fortress) at the Golden Gate.

The walls have suffered from wars, earthquakes, and urban development, but still stand as an impressive monument and a marker of inner and outer İstanbul. Restoration began in the 1980s.

It’s not possible to walk on top of the walls the entire 4.5 km length. There are heavily damaged sections and major roads now pass through most of the original gates. Several times I climbed up steep stone stairs overgrown with weeds and broken in many places. I’d walk a while, then find that I needed to retrace my steps. At other times, I had to walk away from the wall to circle through some neighborhood before returning to it. As a consequence, I had to walk at least twice the length of the wall itself.

The route is part of the Sultan’s Trail, a project to build a long-distance path from Vienna to İstanbul. That project appears stalled, but you can still see blazes for it. You can also see many aspects of İstanbul: beautiful vistas and trash piles, new and ancient constructions, carefully planned development and urban sprawl. In Turkish, I’d say güzel ve çirkin, yeni ve eski, iyi ve kötü.

There are many interesting sights along the wall. My favorite is the Mihrimah Sultan Camii (mosque) at Edirnekapı (the Edirne Gate). It was designed by Mimar Sinan (“Sinan the Architect”) for the favorite daughter of Suleiman the Magnificent, Princess Mihrimah. It’s filled with light due to the extraordinary number of windows, a speciality of Sinan’s. Although it’s a large cami, it has only one minaret, symbolizing the loneliness of Mihrimah and Sinan due to their forbidden love. Edirnekapı itself is where Sultan Mehmed II entered the city after its defeat in 1453.

As I walked, I imagined what it would take to make something like the Promenade Plantée in Paris or the High Line in New York City. With some repairs to the wall, a little new construction, and handrails for people like me, İstanbul could have the best of these new urban walkways.

Walking back through a park along the Sea of Marmara made this into a strenuous, but rewarding day. I was personally fortified with a tradtional Ottoman dinner in the Sultanahmet area at Pasazade and appreciated the Ottoman-style furniture in our hotel. The day after, we ate at Asitane, which claims to have done six months of research on the details of fine Ottoman court cuisine in order to recreate that food culture. 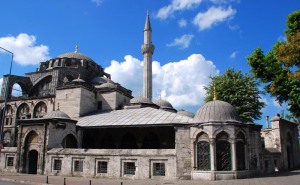 İstanbul is a city of contradictions––part Europe and part Asia, part ancient empire and part modern democracy, part bustling metropolis and part quiet byways. It’s hurtling toward the future with modern buildings, massive construction projects, and crushing traffic, but it’s also a city filled with its history, which is to a large extent the history of much of the world.

Today we saw some of the latter. We visited the Kılıç Ali Paşa complex, including a camii (mosque), a medrese (seminary), a hamam (bath), a türbe (tomb), and a çeşme (fountain). It’s in Tophane, which is part of the Beyoğlu district, on the shore of the Bosporus. It was built by Kılıç Ali Paşa, following the design of the great architect Mimar Sinan. Sinan was 90 when he began the project and 98 when he finished.

It’s beautiful inside and out. It shows one of Sinan’s specialities, a massive structure, which is surprisingly delicate and full of light. There are 247 windows including 24 for the central dome. Try the virtual tour. 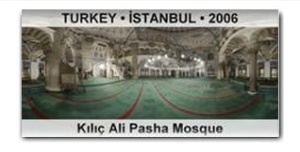 One legend about the site is that when Kılıç Ali Paşa decided to endow a mosque, he applied for a grant of land. The Grand Vezier said: “Since he is the admiral, let him build his mosque on the sea.” Kılıç Ali Paşa brought in rocks and built the mosque on an artificial island connected to the mainland by a narrow causeway. The complex is now well inland, since the sea was filled during the construction of a modern port.

Another legend is that Miguel de Cervantes was a forced worker at the construction of the complex during his enslavement, like the character in Don Quixote.

The Museum of Innocence, 83 cabinets, one for each chapter

We also saw The Museum of Innocence. Orhan Pamuk created it, based on the museum in his novel of the same name. He calls it “a declaration of love to the city of İstanbul.”

Visiting the museum is like experiencing an alternate reality version of the book. You read or listen from the book as you view the exhibits, which are described in the book. The cabinets are numbered to correspond to the chapters, so it’s a museum about a book, a book about a museum, and a multimedia creation about life in İstanbul. The cleverness of it all is fun and doesn’t get in the way (though almost) of Pamuk’s thoughtful, melancholic writing.

Tonight we had dinner at Tarihi Cumhuriyet Meyhanesi, where Atatürk used to eat. It feels like eating in a restaurant from the 1920’s. The walls are covered with photos and news articles from its 150 year existence.

With all the snow, it’s felt like a storybook Christmas time.

The deer are regular visitors. They have to resort to holly leaves, which is not their favorite, because they’ve eaten everything else in the yard that is now, or ever was green.

We’ve been sledding and Emily and Stephen went caroling twice. They also cooked an old English dinner, in the traditional style. However, I should add, “traditional” here requires you to take Harry Potter as your source.

The Harry Potter Restaurant’s December Feast started with Warm and Hearty Mulligatawny Soup, followed by Brussels Sprouts with Chestnuts and Mashed Parsnips. The libation was Pumpkin Juice and we finished off with Blancmange. It was a delicious meal, perfectly appropriate for a snowy December evening.

You can see the menu below left.

We just had an amazing evening in an Iranian restaurant.

Vida La Vida (formerly Coffee Dance) at Fjärde Långgatan 48 Linnaeus, Göteborg, is a small, but imaginatively decorated place that plays an important role in the local art scene. The eponymous Vida is the multitalented owner and for us this evening, a very charming host. 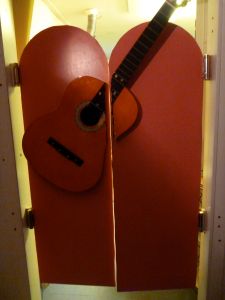 We were invited to enjoy music and dinner at Vida La Vida by Bernardo Borgeson, an Ecuadorian/Swedish filmmaker, who has directed many critically acclaimed documentaries and short films. He’s also worked with marginalized youth to tell their own stories through film. These are often quite powerful and disturbing films.

We shared a small table with Bernardo’s friend. The only other table was a large one with Vida’s Iranian family and their friends, several of whom were visiting from the U.S.

Various individuals performed on the tar, daf, and other instruments, and sang songs such as Dele Divane and Soltane Ghalbha. The singing was beautiful, almost hypnotic. Many of the songs convey a sadness and sense of longing or loss, even if one doesn’t undertand the words. 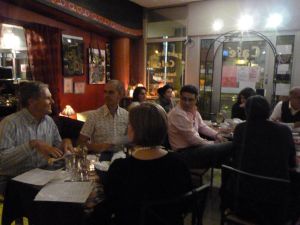 There was also a lot of group singing, which we were invited to join, with song sheets showing the Farsi words in a Latin alphabet. All of this occurred as we enjoyed an excellent dinner of salmon, fresh vegetables, and good Persian bread.

The large group included a young couple about to be married. There was also a woman celebrating her birthday, so we sang happy birthday in Farsi (Tavalodet Mobarak), Swedish (Ja, må du leva), and English. They brought us into all parts of the evening, which went on for several hours, and included an excellent dinner plus birthday cake.

Need I add that this was not what we had expected in Göteborg? The evening was topped off by a walk home in which we saw ladybugs, witches, and skeletons. The intensity of the evening at Vida La Vida made us forget that it was Halloween here!