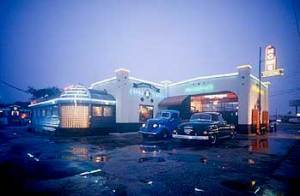 A couple of nights ago, my sister, mother, and I went to Threadgill’s Home Cookin’ on N. Lamar in near north Austin. It’s not far from where I lived when I was in graduate school at the University of Texas.

I used to listen to Kenneth Threadgill and the Hootenanny Hoots when they played at the Split Rail in south Austin, so going to the restaurant brought back many fond old memories.

We had a delicious dinner in the kind of informal, but comfortable setting that I like a lot. At least for my own experience, I agree with the claim on the restaurant website that:

It is a simple fact that the Threadgill’s restaurants, museum and live music venues have more to do with Austin’s cultural and musical heritage than most any other institution within the city limits.

The history goes on to add:

Perhaps country music lover and bootlegger Kenneth Threadgill had more in mind when he opened his Gulf filling station just north of the Austin city limits in 1933, for the day that Travis County decided to “go wet ” in December of the same year, Kenneth stood in line all night to be the first person to own a liquor license in the county. Soon, the filling station became a favorite spot for traveling musicians since it was open 24 hours for drinking, gambling and jamming. Kenneth would sing songs by his beloved Jimmie Rodgers nightly. Musicians who came to play were paid in beer. Such was the atmosphere at Threadgill’s, it was only when a curfew was enacted in 1942 that its owner had to get a key for the front door, before that it had yet to have been locked.

Threadgill’s was important in the development of the Austin music scene. While Threadgill sang Jimmie Rodgers songs, Janis Joplin developed her country and blues hybrid. Other performers brought in rock & roll or music from Mexico.

Claude Matthews produced and directed a very good documentary video about Threadgill and his restaurant, Singin’ the Yodeling Blues. Here’s part 1, with links to parts 2 and 3 on Youtube: