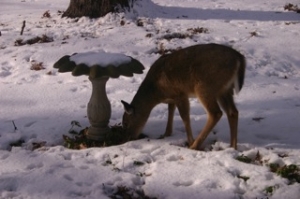 With all the snow, it’s felt like a storybook Christmas time.

The deer are regular visitors. They have to resort to holly leaves, which is not their favorite, because they’ve eaten everything else in the yard that is now, or ever was green.

We’ve been sledding and Emily and Stephen went caroling twice. They also cooked an old English dinner, in the traditional style. However, I should add, “traditional” here requires you to take Harry Potter as your source.

The Harry Potter Restaurant’s December Feast started with Warm and Hearty Mulligatawny Soup, followed by Brussels Sprouts with Chestnuts and Mashed Parsnips. The libation was Pumpkin Juice and we finished off with Blancmange. It was a delicious meal, perfectly appropriate for a snowy December evening.

You can see the menu below left.

Today is the 125th anniversary of the birth of Arthur Mitchell Ransome. He was an English author and journalist, who is best known for writing the Swallows and Amazons series of children’s books.

Ransome is still popular in England, especially among those who live in or travel to the Lake District or the Norfolk Broads, where the books are set. He’s less known in the US, which is a pity. The books relate holiday adventures of children, including sailing, fishing, and camping, and offer adventures for both young and old.

We lived with our kids inside of those books during our 1996-97 sabbatical year, as we traveled in China, Australia, and Europe. While in England, we visited many of the places described in the book. Little did I know at the outset that we would be living the adventures themselves.

We had an inauspicious arrival in England in March, 1997. We were tired from a year of international travel, living in strange places, eating new foods, and each living out of a ten kilo bag of clothes and toiletries. As we left Heathrow airport we encountered a huge downpour and to top it off, it was late afternoon and getting dark. 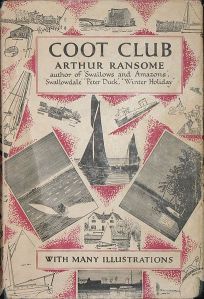 Coot Club, the fifth book in the series, was published in 1934. BBC produced a film based on Coot Club in 1984. In the book, Dick and Dorothea Callum visit the Norfolk Broads over Easter holidays, hoping to learn to sail.

Being devoted Swallows and Amazons readers, and as it was almost Easter season, we had to journey to the Broads ourselves. En route, I had this conversation with eleven-year-old Emily:

Emily: We’ll be staying in a houseboat there, right?
Me: Emily, I wish we could, but it’s after five already. We have no reservation anywhere, much less a houseboat.
E: But in Coot Club, they were in the Norfolk Broads and they stayed in a houseboat.
M: That was in the novel, but we’re not. You can’t just find a houseboat any old time,
E: I know we will.
M: It’s off season. I have no idea whether there are any houseboats, much less how to find one. I’m afraid we’ll be sleeping in the car.
E: I know we will.
M: [gives up]

Just as I was beginning to look for an unflooded spot to park the car for the unpleasant night ahead, we rounded a turn and saw a house lit up. There was a sign out front: 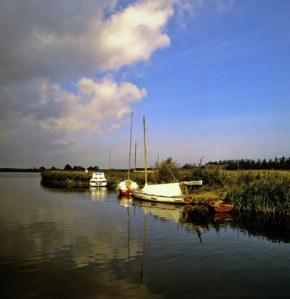 E: See?
M: OK, there are houseboats, but I still don’t know. Is it really available? Can you rent it for a couple of nights? Please don’t get any unrealistic expectations. I don’t want you (or ten-year-old Stephen, her silent ally in this parent-child struggle) to be disappointed.

Nevertheless. I went up to the door:

M: Do you really have a houseboat for rent?
Owner: Yes.
M: Is it available now for a short rental?
O: Yes, I hadn’t planned to open the boats up so early in the season, but decided just today to get one of them ready.

So, we ended up in a dry houseboat that night, just as the Callum children do when they stay on the Teasel. There was even a dinghy attached, just as in Coot Club. More conversation ensued:

E: Tomorrow we can go out to protect the baby coots from the Hullabaloos, just as they did in Coot Club.
M: I’ll ask whether we can use the dinghy, but I don’t even know what a coot is.
E: I know we will.
M: Even if there are coots, I don’t know that any of them have babies now.
E: I know they will.
M: And there may not be any Hullabaloos either.
E: There will be and we need to protect the coots from them.
M: [gives up]

The next morning we went out in the dinghy, as I remember, just Emily, Stephen, and me. We followed along one of the canals so common in the Broads. Around a bend, we saw a water bird’s nest. Inside were baby coots. Just then, a large motorboat filled with Hullabaloos came into view, heading perilously towards the coots’ nest. We quickly maneuvered the dinghy so that it stood between the motorboat and the nest, protecting it from the Hullabaloos, just as the children did in Coot Club. 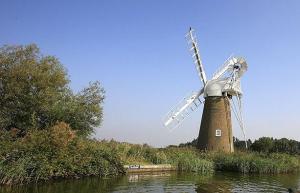 We came to know the boats of Coot Club: the Hullabaloo’s motorboat, the Teasel, the dinghy, and esepcially, the childrens’s pirate boat, the Death and Glory. The Death and Glory is described as “an old black ship’s boat, with a stumpy little mast and a black flag at the masthead.” It’s rowed with oars or propelled by a “grey, ragged, patched old lugsail, far too small for the boat.”

As we related our adventure to the houseboat owner, he reminded us about that boat, too. He asked, would we like to see it?

Then he told us that when the BBC produced the Coot Club film, they used the Death and Glory boat. He now had that very boat on his property, just 100 yards from where we had been staying.

Yes, we went to see it, yes it was wonderful, and yes, I learned something about arguing with my children about literature and life.

This could have been a post about a walk on the Cliffs of Howth, a small seaside town north of Dublin. Yesterday was a beautiful day, with a brisk wind and light cirrus clouds–a great day for a cliff walk if you don’t stand too close to the edge and if you watch your footing on the muddy track and wet rocks. 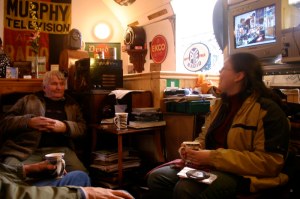 But before we began the walk, we happened upon a wonderful small museum about the development of radio: Ye Olde Hurdy-Gurdy Museum of Vintage Radio. It’s in the Martelo Tower above the harbor, at one end of the cliff walk. Pat Herbert, the founder, is passionate about what he’s learned about radio, and communications in general, drawing everyone else into it. Susan adds:

Pat played a tape on which a group of amateur radio enthusiasts had recorded a conversation with the Space Shuttle Columbia during the few minutes it was over Ireland in 1983, 20 years prior to its tragic crash over Texas. One of the astronauts at the time was an amateur radio enthusiast, and Irish amateur radio people had spent hours trying to contact him. A visitor to the museum gave Pat the tape, which he owned only because his brother had been one of the 1983 radio buffs. The entire visit was like that, just one story after another… He had many stories, mostly directed at Emily. And, typically, at about 1:00, announced that it was about time for a cup of tea and biscuits. So we sat around and talked for a good while. 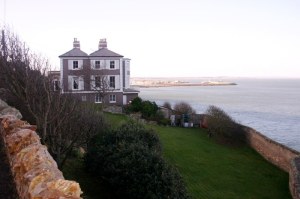 Pat said that not many school groups come to the museum. That’s a shame, because the exhibits could be fascinating to young people as well as to those who lived through some of the times presented there. I think especially of young people in transition year programs (age ~15), who are doing new media projects, such as at the Suas Foundation’s excellent Bridge to College (B2C) programme . The museum would introduce interesting technologies as well as add an historical perspective. 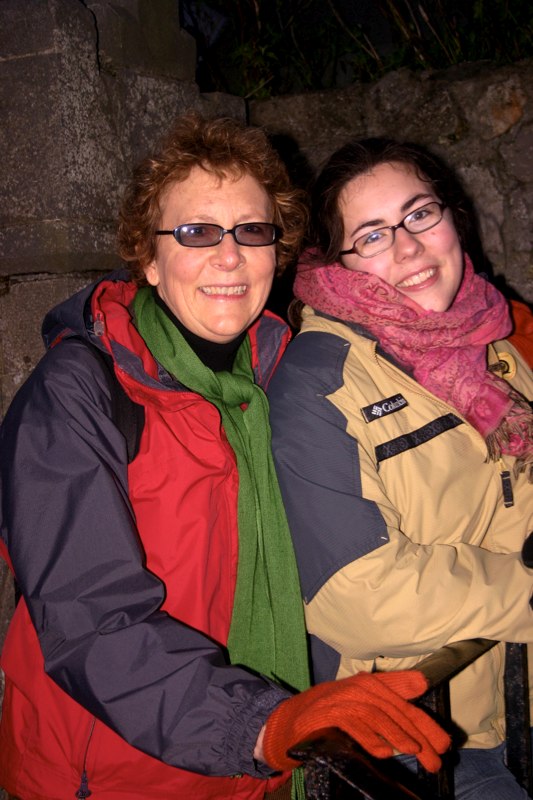 When we did manage to set off on the hike we had a wonderful windy time, circling a good part of the Howth peninsula with grand views of the Ireland’s Eye and the Dublin harbor, and then making it up to the Ben of Howth. Eventually returned to the port in time for early dinner at The Oar House. 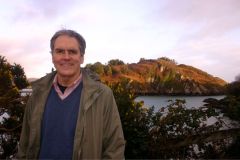 We had a wonderful Christmas in Kilcrohane on the Sheepshead Peninsula in West Cork. We went with Stephen, over from St. Petersburg, Russia; Emily, from Minneapolis; and Matt, one of their friends, from Saint-Raphael, France. Our week included a visit to Fitzpatrick’s one evening, several to the O’Mahony store, and stops in Durrus, Bantry, Ahakista, and other charming towns. 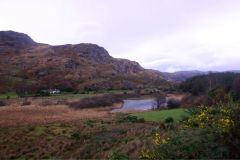 We also had winds, fog, sleet, and torrential rain. Locals call it “rain,” even though it blows horizontally, rather than falling sensibly from the top down. There were several terrific gales (or was it one long one?), which made us thankful for the stone walls of Betsy and Michael’s cottage. Sitting by a warm fire, we could look out on gorgeous Dunmanus Bay with sunny skies one time and am awesome storm the next.

Despite the general theme of winter storm, we had frequent sun and glorious skies. That allowed us to manage several good walks. One was in the ancient forest above Glengariff; another around Lough Hyne south of Skibbereen; and others on the Sheepshead Way. We made good use of Kevin Corcoran’s West Cork Walks.

Emily was a writing dervish, thus missing some of the walks. Her friend Matt played his guitar, while posed on the large window seat. Stephen had a swim down at the end of the road. He was inspired in part by Frank O’Mahony, who had done the St Stephen’s Day charity swim at the pier. Perhaps it was warmer for the swimmers to be in the water than in the air, given the sleet and winds. And we played a fair bit of bridge.

This is Emily at the memorial celebration for Bernard Porter. There was plenty of wine and cheese, his style. It was held in the home he built in Los Gatos, California, on December 30, 2006. 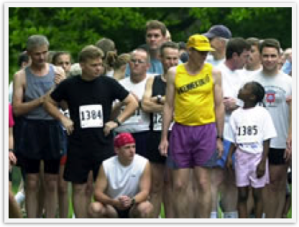 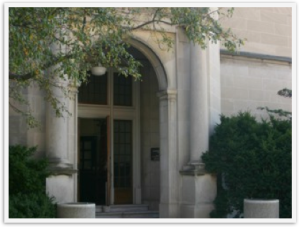 While at Uni High, Emily spent a :emester tutoring Adolph Willms and learning his life story. See this article by Mary Schenk in The News-Gazette (June 5, 1999):

URBANA – Adolph Willms has a lifetime of memories tucked away in his head. Some days he can summon those. Other days it’s not so easy.

With the help of an education researcher and three teen-age girls from University High School in Urbana, the 83-year-old stroke victim has been able to recall many past experiences.

Researcher Patricia Marton of Bloomington was so impressed with Willms’ life experiences as a farmer in the St. Joseph area that she persuaded local…

While in Queensland, Emily and Stephen attended Rainworth State School in Bardon, Brisbane. 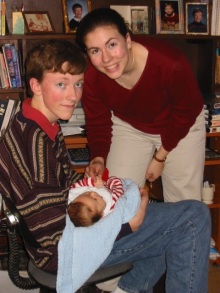 Stephen and his Grandmother Todd

The picture shows her on the day of graduation from