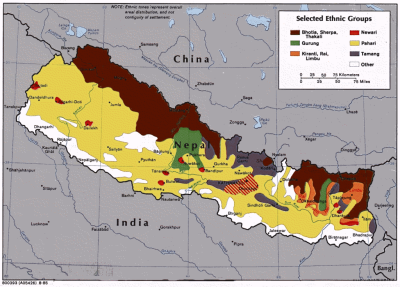 In an area about the same size as Illinois, smaller than New England, Nepal boasts an amazing array of languages.

The 2011 National census lists 123 mother tongue languages. Nepali is the official language, and is spoken by nearly half of the people (although with multiple dialects). The others are all “national languages,” which are accepted as official at the regional level.

These languages can be quite different. In fact, they belong to at least four major language families. Most of the languages are in the Tibeto-Burman group, but only 18% of the people speak these. The largest population percentage is for languages in the Indo-Aryan family. There are also a number of Dravidian languages and Austroasiatic languages.

Nepal also has several indigenous village sign languages, as well as the official Nepali Sign Language (which is unrelated to oral Nepali). I actually learned a few words of the latter while waiting for a friend at a restaurant where the staff were mostly sign language speakers. When they asked what I wanted to order, at least I could say “I’m waiting for my friend.” 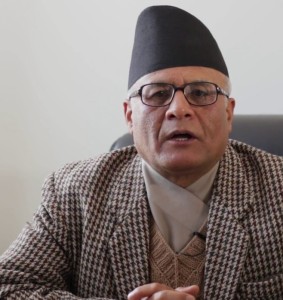 My friends in the photo above are signing “peace” and either “Spiderman is great” or “I love you” (I didn’t ask). These are not necessarily in official Nepali Sign Language.

Along these lines, I was fortunate to meet Lava Awasthi, the Chairperson of the Nepal Language Commission. He said that although there are 123 national languages, the Commission suspects that there are many more. And in addition to the four well-established language families, there may be at least one, maybe two more. So, this is an active area of research. The terrain of course makes it difficult to study for the same reason that there are so many languages in a relatively small territory in the first place.