Camara is a wonderful program, which could be described in simple terms as a way to stop filling landfill sites with the hazardous waste of old computers, and instead, send those computers to schools and colleges in Africa. But it’s really much more than that.

I was fortunate to get a tour of the new Camara facilities now located in the Digital Hub near the Guinness Warehouse in the Liberties area of Dublin. I’ve now also had a chance to meet with various Camara staff and volunteers. I learned that Camara delivers computers to schools throughout Africa; sends volunteers to teach technology in Africa, and creates computer training materials and educational multimedia for schools in Africa.

There are many distinctive features of the Camara operation. One is that computers are loaded with Camarabuntu. This is a complete operating system (Linux), plus an office suite, web browser, many educational applications, and a condensed Wikipedia. It’s designed for a teacher to be able to setup a complete computer-based classroom quickly and easily.

There is also much attention to the volunteer experience, including providing opportunities for people with a wide range of skills and available time. Post-prinary and third-level students participate, as do retired people, and many others. Camara finds ways to involve everyone. Even those who donate computers are asked to help with the initial sorting of parts. They also help with culture shock for those who make the four-week trip to Africa. 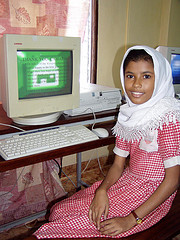 One derivation of the name, Camara, is from a West African word meaning, “one who teaches from experience.” Another is from Dom Hélder Pessoa Câmara the Roman Catholic Archbishop of Olinda and Recife, who had an uncompromising commitment to the poor. Câmara’s “Spiral of Violence” calls upon the youth of the world to break the spiral that their ancestors and parents have perpetuated. The Camara computer to Africa program brings together these aspects of learning and social justice in a refreshingly practical and successful way.