Friday was the eve of the new year (2075) in Nepal, with big celebrations in Pokhara. We celebrated by paddling a doonga (or dunga) on Fewa Lake.

A doonga looks a bit like a canoe, but it’s much heavier. They’re made of old teak from the Terai in southern Nepal. This is much denser wood than found in the local teak, hence it’s stronger and heavier. One doonga can weigh 500 kg (1100 lbs.). 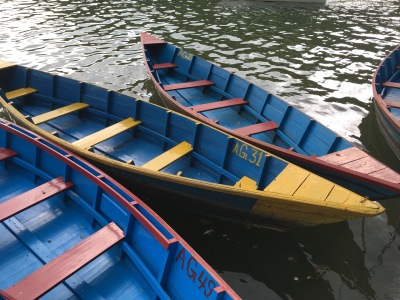 They’re good boats, which can easily carry five or more people. They’re stable unless the wind gets too strong. We found them to be slower than a canoe, and a bit tiring with the heavy teak paddles. Nevertheless, they’re mystical to see on the lake.

Fewa Lake is beautiful, with large sections of shoreline undeveloped. There are views of green hills all around, and behind them the Himal, with occasionally clear sights of Machupuchare (Fish Tail) mountain.

Cotton rope, a form of oakum, for sealing the doongas

After our paddle, we talked to  Jhapu, who builds and repairs doongas. He described how he used cotton rope to fill cracks between the planks. He then covers the rope with pitch, applies a layer of primer, and finally enamel.

Lake view with marina in center back