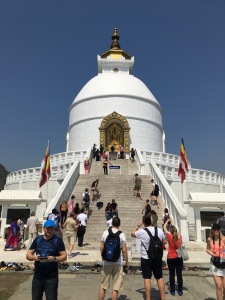 Today’s BBC News reports on an important development in Nepal, one which should be a warning to us all (Nepal drains dangerous Everest lake).

Nepal’s army has just completed lowering Lake Imja by 10 ft. This is because it was in danger of flooding downstream settlements with over 50,000 people.

Lake Imja, near Mount Everest (Sagarmatha) at 16,400 ft altitude, is one of thousands of such glacial lakes in the Himalayas. Many of the lakes are filling fast because of accelerated melting of glaciers due to rising temperatures.

The Himalaya region has been described as the third pole of the earth. It is melting, just as the Arctic and Antarctic are.

Lake Imja is a good example of that melting. It is a new lake, composed of glacial meltwater blocked by a terminal moraine. In 1962, it was 7.5 acres, and is now over 260.

I can only guess at the enormous cost of the six-month project, not just in dollars, but in terms of using up limited Nepali resources. It has been necessary to save lives, but sherpas in the region say there are many more lakes that endanger communities.

When Shiva had been walking for a long time in the mountains north of the Kathmandu Valley, he grew thirsty, but there was no water to be found. Angry at that, he drove his trishula, or trident, into the ground to create three springs, which in turn created a river.

In any case, Shiva’s river, the Trishuli, later joins the Bhote Kohsi that flows from Tibet and becomes a spectacular mountain river, with exciting rapids and impressive gorges. It is no surprise that it’s Nepal’s most popular rafting river. It looks like large parts of it could be canoed as well.

The Trishuli flows through mostly Buddhist regions then into Hindu areas. It is one of the major tributaries of the Narayani River, which eventually goes into India to join the Ganges.

At this moment, I’m sitting on a veranda looking out at a series of hills that we would call mountains in New England. The view is partially obscured by a profusion of bougainvillea, poinsettia trees, palms, and many tropical plants I can’t identify, Workers at this guest house where we are staying have to keep cutting back the gorgeous greenery that people in Massachusetts would struggle to nurture as tiny house plants.

Yes, the economic conditions are bad, the roads are full of surprises, the electricity is whimsical, and the effects of the 2015 quake are still felt, but all the people we meet are warm and generous. They use their adequate English to help me learn a few words of Nepali.

Locals directed us to a walk one way to see the hilltop village of Nuwakot with its durbar, or palace, square, now being restored; another to make a circuit of the hill behind with spectacular views; another to explore the farm with its geese, turkeys, donkeys, goats, and naturally organic vegetables.

But this evening seems like a time to stay on the veranda and take in the mountain air and the beautiful sunset silhouetting the hills.