My evening flight from Kathmandu to Delhi was canceled, so I had to take one five hours earlier. Although I wasn’t happy about the resulting extra layover time, flying earlier in the day meant that I had a glorious panorama of the Himalayas most of the way. Since Delhi is directly west of Kathmandu the 500-mile flight path was as if made to order for the view.

The Himalayas are a feature of our world that call for silent awe, and need no supporting adjectives, such as “stunning” or “snow-covered.” They’re the antithesis of another, also beautiful, feature of our world, Cape Cod. Its glacial drift formations are a gentle lullaby to the Himalayan symphony.

However, as we flew along the southern edge of the grand plateau, I took my eyes, or ears, away from that symphony from time to time because I couldn’t put down the book I was reading. In The Path: A One-Mile Walk through the Universe. In the book, Chet Raymo describes the path he took for 37 years from his house in North Easton, Massachusetts to the Stonehill College campus where he taught physics and astronomy.

Just as we were passing from Nepal into India, I read this:

Millions of years ago India, drifting northward on the mobile surface of the earth, nudged into Asia and began pushing upward a double-thickness slab of the Earth’s crust known as the Tibetan plateau, the front range of which are the towering Himalayas.

Raymo goes on to explain how sunlight beating down on the plateau produces warm air. As it rises, moist air from the Indian Ocean takes its place. This creates the Indian monsoon cycle. Heavy rainwater combines chemically with the Himalayan rock. The weathering takes carbon dioxide out of the air.

As the mountains rose and eroded, the amount of carbon dioxide in the atmosphere decreased and Earth began to cool. On Northern continents ice sheets formed and moved across the land, grinding, abrading.

Thus, mountains in Asia caused glaciers in New England and those in turn built the Cape Cod beaches where we swim every summer. The symphony is magnificent, but it needs the lullaby to follow.

India continues its journey northward; the Himalayas continue to rise; the sun still beats down; the monsoons cycle onward, and the rains take carbon dioxide out of the air.

But don’t look for the glaciers to return anytime soon to build up more places to plant your beach umbrella. Our technologies are now overwhelming these natural processes. Combustion of fossil fuels is adding far more greenhouse gases to the air, warming the world and covering up those glacial sands with rising sea water. 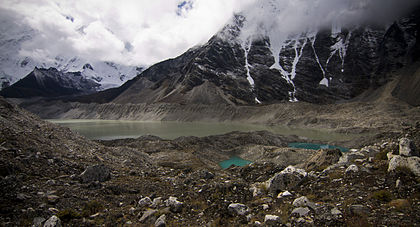 Today’s BBC News reports on an important development in Nepal, one which should be a warning to us all (Nepal drains dangerous Everest lake).

Nepal’s army has just completed lowering Lake Imja by 10 ft. This is because it was in danger of flooding downstream settlements with over 50,000 people.

Lake Imja, near Mount Everest (Sagarmatha) at 16,400 ft altitude, is one of thousands of such glacial lakes in the Himalayas. Many of the lakes are filling fast because of accelerated melting of glaciers due to rising temperatures.

The Himalaya region has been described as the third pole of the earth. It is melting, just as the Arctic and Antarctic are.

Lake Imja is a good example of that melting. It is a new lake, composed of glacial meltwater blocked by a terminal moraine. In 1962, it was 7.5 acres, and is now over 260.

I can only guess at the enormous cost of the six-month project, not just in dollars, but in terms of using up limited Nepali resources. It has been necessary to save lives, but sherpas in the region say there are many more lakes that endanger communities.

It’s not that Sutter offers new data or analysis on sea level rise per se. There is plenty of that already. For example, Dahr Jamail’s excellent recent summary ‘Climate disruption in overdrive: Submerged cities and melting that “feeds on Itself”‘ is enough to ruin whatever you might imagine could be a good day. It starts with this

the planet is warming a stunning 50 times faster than when it comes out of an ice age. The implications of the rapidity of this warming, for those who care to digest it emotionally, are horrifying…. even if carbon reduction targets are achieved and the planet’s temperature is kept below the 2 degree Celsius warming threshold, sea-level rise will still inundate major coastal cities around the world, forcing one-fifth of the total world population of humans to migrate away from the coasts.

and goes downhill from there.

But Sutter shows what dreary statistics can mean for ordinary lives:

Isle de Jean Charles, the mostly French-speaking, Native American community where Billiot [Wenceslaus Billiot, an 88-year-old born on the island] lives, once was about the size of Manhattan. Now, it’s about a third of Central Park.

And what’s left is going fast.

“I don’t know how long we’re going to stay here,” Billiot told me.

I’ve never been to Isle de Jean Charles, but have traveled in that area just south of New Orleans. Susan and I once camped in a tent at Grand Isle State Park. We feasted on Gulf shrimp we bought directly off a trawler. It’s a rare and magical place to visit.

For the people of Isle de Jean Charles, the island is more than simply a place to live. It is the epicenter of our people and traditions. It is where our ancestors cultivated what has become a unique part of Louisiana culture. Today, the land that has sustained us for generations is vanishing before our eyes.  Our tribal lands are plagued with a host of environmental problems — coastal erosion, lack of soil renewal, oil company and government canals, and a rising sea level — which are threatening our way of life on this gradually shrinking island.

The land’s beauty is enhanced by the feeling of its impermanence, whether because of hurricanes or natural changes in estuaries and dunes. If I were typesetting the island, I’d look for a wispy font with a small type size. 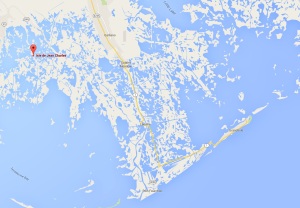 But the fact of the impermanence has now been written in 96 point bold by the actions of humans rapidly destroying the land. Channeling the river, adding dams and levees, drilling for and transporting oil, developing resort communities, and other activities have all played their part, but stronger hurricanes and sea level rise are the final blows.

Our politicians seem happy to stay in blissful ignorance of all this (see ‘In their own words: 2016 presidential candidates on climate change’). Republican leaders are actually in denial and Democrats make tepid statements without programs for meaningful change. Naomi Klein writes that to make those changes, “some powerful interests will have to lose”:

A president willing to inflict these losses on fossil-fuel companies and their allies needs to be more than just not actively corrupt. That president needs to be up for the fight of the century—and absolutely clear about which side must win. Looking at the Democratic primary, there can be no doubt about who is best suited to rise to this historic moment.

For Klein, Bernie Sanders is the one best suited for that rise. But could anyone who stands up to the fossil-fuel companies ever be elected President? More importantly, could they stand up to the fossil fuel users, meaning us?

To win “the fight of the century” many more people need to connect the larger processes of human-induced climate change to the particulars of places like Isle de Jean Charles, and further, to connect that to the choices we make about lifestyle and to what we value.

When we think about problems such as intolerance, economic justice, or climate change, should we focus on the local or the global? the short-term or the long-term? the social or the technical? Questions such as these recur in ways that often lead to discouragement, including the feeling that nothing can be done on any problem at any level.

Naomi Klein discussed this in last June’s College of the Atlantic commencement address, Climate Change Is a Crisis We Can Only Solve Together. She writes, “the very idea that we—as atomized individuals, even lots of atomized individuals—could play a significant part in stabilizing the planet’s climate system, or changing the global economy, is objectively nuts.” There must be “a large, organized, and focused movement.” And yet, she goes on to say, local activism is critical: It’s winning big fights, showing us what the future looks and feels like, and inspiring bigger examples. In short, we need both.

What Klein says makes a lot of sense. But it’s often hard to find examples that bridge between the local and the global, the immediate need and the needed long-term change, or between social and organizational work and technological fixes.

Yesterday at MIT, Nama Budhathoki gave an inspiring talk on the work of Kathmandu Living Labs. It was titled: Nepal’s Digital Innovation for Social Good: Looking Back to the April Earthquake. His project offers such an example.

KLL uses online mapping to address a wide variety of social challenges. This can be seen most dramatically in the timeline of KLL’s response to the April 25 earthquake in Nepal. For an excellent summary of their work, see Naomi Bloch’s article GIS & the Global Community: Humanitarian Mapping.

Through KLL, a farmer in a remote Nepalese village can integrate his local knowledge of a field or stream with that of an engineer at MIT. People in Nepal, despite their own challenges, can become among the largest contributors to relief efforts following Typhoon Haiyan in the Philippines. Detailed information about a school can be used to influence government policies and actions. This connecting across levels or communities is something many people talk about but few have shown how to achieve.

There are many reasons for KLL’s success, including the dedication of Nama and his team. But what also seems clear is that KLL offers remarkable models for how people can work together to achieve common good.