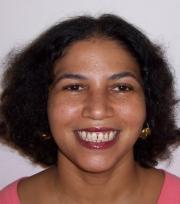 I heard a very impressive lecture yesterday titled, “The ‘Invisible’ Forces of Haiti—How Can Books and Culture Help the Reconstruction Process,” from Elizabeth Pierre-Louis, library program coordinator at the Fondation Connaissance et Liberté (FOKAL), Haiti. There should soon be links to a video recording and the text from the summary.

The talk reminded me of  the devastation of the Haiti earthquake. As bad as the 1989 Loma Prieta earthquake in California was, the recent earthquake and tsunami in Japan was many times worse than that in terms of deaths and homes destroyed. But the Haiti earthquake was many times worse than Japan’s with as many as 300,000 killed and 1.5-2 million homeless. The current cholera epidemic shows that even a terrible situation can become worse.

Haiti has neither the money nor the technical expertise to recover, and half of the people are under age 21 (some sources say half are under 18). It’s also one of our closest neighbors, and many of its problems are directly traceable to the US’s unquestioning support for the Duvaliers’ dictatorship that robbed the country of what little it had. Last year, the world pledged $5 billion in aid, which was not nearly enough, but then delivered on only a third of that.

It’s inspiring, and humbling, to see how Haitians continue to live, to create, and to work together in spite of challenges no one should have to face alone.