In these times, we hear about family events through cell phones, Facebook, Twitter, and for a few old-timers, email. I got to meet a new grand-nephew that way just last week. 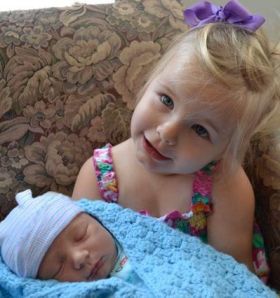 But that wasn’t always so. I came across an older technology while we were cleaning up our attic. It’s a rebus announcing Sunny Baby Jim, with at least 230 cut-outs from newspapers and magazines pasted onto a continuous roll of brown wrapping paper. It not only announces the baby, but also provides a glimpse into life in the US in 1905.

The paper for the rebus has become brittle and is starting to crumble. Some of the cut-outs are faded.I decided I should photograph it and decode it before it disintegrates completely.

It’s probably from my Great-Great-Aunt Fanny in Spokane, writing to my Grandmother, Dorothy in 1905. See whether you can decode it. The images aren’t very clear in the small versions, but should be more readable if you click each one to enlarge it.

There’s a scrap cityscape of Spokane, which probably came first. So, I think the first part says,

I send you a puzzle to make you laugh.

It is raining cats, dogs, and babies.

The babies shown include the Gold Dust Twins, mascots for Gold Dust Washing Powder. Those racial caricatures were wisely phased out, but not for another 50 years.

Aunt Fanny goes on to ask:

Would you like to hear about the new baby in this house? He weighs nine pounds and sleeps all night, that’s the way babies grow. When he smiles we call him Sunny Jim Baby. 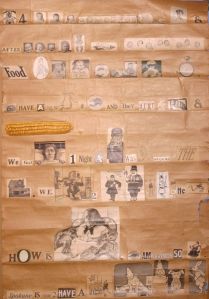 Then, there’s a comment about babies in general, and some local news:

I have a new pair of shoes and they hurt my feet and corns.

We got awakened one night. A shot was heard around the house. We called two policemen and he ran away.

How is Grandmother? I am getting so fat.

Spokane is soon to have a circus. [There’s then a six-frame comic strip set in a circus ring.]

While looking up information on that circus, I learned that a steel bridge with power wires for streetcars and overhead lighting was constructed over the Spokane River Gorge after the wooden bridge burned in 1890. The new bridge vibrated badly, and in 1905 the National Good Roads Association declared it unsafe. The Ringling Brothers Circus elephants refused to cross it. It was replaced in 1911.

The closing of the rebus reports some national news:

It is time for a bath and bed.

Love to the whole damn family.

PS: Teddy Roosevelt is in Colorado. [He went bear hunting there in 1905.]

I don’t know how long we can keep the original of the rebus, thus this post to preserve it in a limited way. But it’s held up surprisingly well after 106 years, especially since it had not been cared for, just tossed into boxes in attics or garages. Will we be able to read this blog post as well in the year 2117?

Thanks, Aunt Fanny for your fascinating artwork. I suspect that few aunts (or uncles) today could or would invest the time to make such a detailed token of love for their niece.

3 thoughts on “A rebus baby announcement”