Network neutrality means no restrictions by Internet Service Providers and governments on content, sites, platforms, attached equipment, or modes of communication. This includes neither blocking sites nor offering tiered service models. It can be viewed from the perspective of users wanted to access particular content, such as peer-to-peer sites for video or music, or from the perspective of producers seeking to deliver their content more effectively to users.

History. Concerns with telegraph: “messages received from any individual, company, or corporation, or from any telegraph lines connecting with this line at either of its termini, shall be impartially transmitted in the order of their reception. (Pacific Telegraph Act of 1860)

The Internet developed out of public funded services, such as Arpanet, NSFnet, TCI/IP. Eventually centralized routing aspects were removed, allowing the free-wheeling Internet we use today. But in recent years, corporate control over key aspects of the Internet has grown, essentially privatizing a service developed at public expense to serve public needs.

Tiered service. Opponents of net neutrality see it as “a solution in search of a problem”, arguing that broadband service providers have no plans to block content or degrade network performance. Yet, Comcast, for example, “intentionally and secretly blocked access to lawful content on the Internet,” e.g.,  peer-to-peer (P2P) communications, such as BitTorrent. The FCC attempted to block that, but lost that authority after a US Court of Appeals decision on April 6, 2010.

Google may soon reach an agreement with Verizon, which will severely compromise the free flow of information that has made the Internet such a powerful force for creativity, collaboration, and learning.

Gesa Kirsch recently pointed me to John R. Stilgoe’s, Outside lies magic: Regaining history and awareness in everyday places. It’s a refreshing call for becoming more aware of the ordinary world around us. Stilgoe urges us not only to walk or cycle more, but also to use the advantages of those modes of transport to see the world that we usually ignore.

I finished the book, and am writing now, in the antipode of his call to walk and observe. I’m cramped in an airplane seat near the end of a four and a half hour flight. Stilgoe would say that I should still take the opportunity to observe, to learn, and to make sense of my surrounding, but instead I’m counting down the minutes until we land.

The chapters—Beginnings, Lines, Mall, Strips, Interstate, Enclosures, Main Street, Stops, Endings—lie somewhere between prose poems, history lessons, and sermons about the everyday. They remind me of John McDermott’s summary that John Dewey “believed that ordinary experience is seeded with possibilities for surprises and possibilities for enhancement if we but allow it to bathe over us in its own terms” (1973/1981, p. x).

To appreciate the book, you need to follow Stilgoe as he discovers nature, history, urban planning, ethics, social class, and more through cracks in the pavement, vegetation, telephone poles, roadside motels, angle parking, and other seemingly forgettable objects. The real point is not his own findings, but the demonstration that slowing down to look can open up worlds of understanding.

He shows the value of a camera, despite the lament that “ordinary American landscape strikes almost no one as photogenic” (p. 179). He recognizes the dread of causal photography (‘why are you photographing that vacant lot?’), but ties it to “deepening ignorance” (p. 181). This ignorance makes asking directions dangerous: People question us back, ‘Why do you want to know?’ 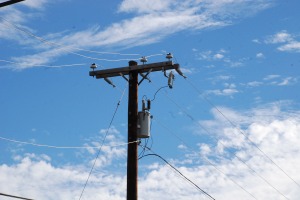 Stilgoe says, “discovering the bits and pieces of peculiar, idiosyncratic importance in ordinary metropolitan landscape scrapes away the deep veneer of programmed learning” (p. 184). Unprogrammed exercise and discovery leads to a unified whole that reorients the mind and the body together. Someone else may own the real estate, but “the explorer owns the landscape” (p. 187).

Exploration encourages creativity, serendipity, invention.
So read this book, then go.
Go without purpose.
Go for the going.

In The Public and its Problems, John Dewey (1927) talked about the need for a vibrant Public as a necessary condition for a healthy democracy. This meant the development of what’s been called a “critical, socially-engaged intelligence,” for citizens who respect each others’ diverse viewpoints, who inquire about their society, and are actively engaged in improving it. Doing this requires open diaolgue, the ability to speak without reprisals, and, it should go without saying, the confidence that one is not being hounded by agencies who operate in secret with little check on their behavior.

A colleague of mine recently showed me her copy of Jane Addams’s FBI file. It’s 188 pages of prying into the life of one of the greatest Americans. Hull House, which she co-founded (1889), was a settlement home for thousands of immigrants in Chicago, providing food, shelter, education, arts, English classes, and an introduction to particpatory democracy. It was the beginning of sociology, social work, and public health. The first little theater in America, the first playgrounds in Chicago, and so much more, came out of Addams’s lifetime of dedication to building a better world for all.

It’s true, Addams protested against World War I. For that she won the Nobel Peace Prize (1931), but also the attention of the Federal Bureau of Investigation, thanks in part to the machinations of J. Edgar Hoover. At least those files are finally public. You can judge for yourself whether our Nation was more secure because of that assault on personal liberty.

Another colleague pointed me to a court case in Canada related to the Canadian Security Intelligence Service’s (CSIS) file on Tommy Douglas. Douglas was premier of Saskatchewan from 1941 to 1960, and led in the development of a universal, publicly-funded single-payer health care system. The success there led eventually to the national Medicare plan in Canada. In part for that work, Douglas was selected as “The Greatest Canadian” of all time.

Now, CSIS argues in an affidavit filed in court last month that “Secrecy is intrinsic to security intelligence matters.” They say that full disclosure of Douglas’s file could endanger the lives of confidential informants.

Since the file is secret, we can’t know whether CSIS is correct in saying that it’s absolutely necessary to maintain secrecy on its operations. For that matter, how do we know that their reluctance isn’t based on covering up their own violations? Reading the file on Addams, I’d say that the only people who might want to hide it are those in the FBI. One thing we do know is that there’s no public basis for these security investigations–no violence, no plots, no attempts to undermine the government.

If the file on Douglas is anything like the one on Addams, we should all ask about the extent to which our security services really serve the public good. Why do we create dossiers on our great leaders, without any public evidence? Does security intelligence trump all other values? Does it help create a vibrant Public when secret agencies are given free rein to explore and document our lives, with little oversight on their own actions?

Maloney, Steven Douglas. The public and Its problems.