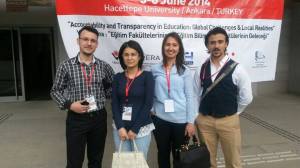 Turkey has an incredible number of archaeological sites, 52 in Ankara alone according to a display at the outstanding Anadolu Medeniyetleri Müzesi (Museum of Anatolian Civilizations).

The museum was selected as the first “European Museum of the Year” in 1997. It has examples from Paleolithic, Neolithic, Early Bronze, Assyrian, Hittite, Phrygian, Urartian, Greek, Hellenistic, Roman, Byzantine, Seljuq and Ottoman periods. 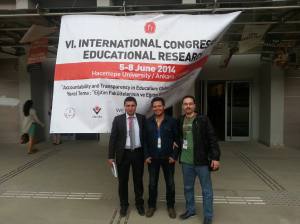 But whether in the museum or at an actual site, whether the people are Turkish or foreign, whether it’s a recreational event or a conference on educational research, the event of the day is the photo op, often in the form of a selfie.

Our civilization adds the latest sediment on top of layers of complex and beautiful artifacts. This is the digital photo, often destined to reside forever within the memory of a smart phone, and occasionally to be shared on a social media site.

Everywhere there are people taking photos or asking to have theirs taken. I hear “one, two, three, cheese” spoken with a variety of accents. But there are many other ways to alert people to the click of the camera and to get them to smile. In Turkey, i’ve heard “one, two, three, peynir,” or “bir, iki, üç, peynir,” substituting the Turkish for “cheese,” just as an Italian might say “uno, due, tre, formaggio.”

People in China sometimes say “Qiézi (茄子),” which sounds a bit like a three-syllable version of “cheese.” Continuing the food theme, many Korean speakers say “kimchi.” In Norwegian, some say “smil,” both requesting a smile and making one happen. One of the more interesting ones I’ve heard is the Turkish, “üç yüz otul üç,” a tongue-twister meaning “333.” However, there are always some spoil sports, including some who say that “cheese” and expressions like that are not good for photos anyway: 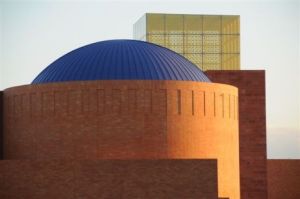 I was recently invited to appear in a book for the Fort Worth Museum of Science and History. They’re featuring people who played an important role in creating the museum, famous people who enjoyed the museum, and for some reason, me.

This project involved making photos of the people in scenes with museum artifacts. In my case, that was to be antique telescopes. It’s not hard to find antiques, since even the new ones from my day are now over half a century old. The photography was to take place in Austin.

My photo shoot went OK in the end, but was a near disaster in many ways. Skipping over several minor problems, which made me a few minutes late, I arrived at what I thought was the site, the J. J. Pickle Research Campus, only to be told that I had come to the wrong place. Michael O’Brien, the photographer, did not have any office there, but could definitely be found at CMA (?) on the main University of Texas (UT) campus. *All* I had to do was drive down Burnet Rd to 183, take IH 35, get off at 24th St, and find my way to his office. That was a white knuckles drive in the Austin traffic, in an unfamiliar car, especially when I don’t see well while I’m waiting for new contact lenses. 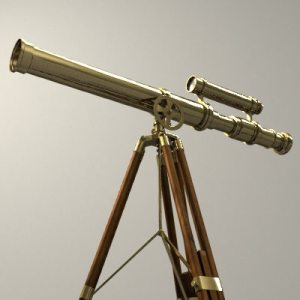 Anyway, I eventually got to the main campus, but at the opposite corner from CMA. I was given a map, but it didn’t show construction. So, I’d drive ten blocks down a narrow street, with cars on both sides, people on bicycles, pedestrians walking haphazardly, while searching for a street sign I could read. Then I’d come to a construction barrier, which meant I had to back up and go a different way. I eventually reached what I thought was CMA.

There were of course no parking spaces, save for one with large signs declaring how your car would be towed within seconds and crushed to a pinpoint of dense matter for use in a cosmology department experiment if you even thought of using it. It was my mother’s car, but she wasn’t there, so, deciding for her, I took the chance. Inside CMA, which by now I’d decided was a top secret agency, known only to a few others with three-letter acronyms, I asked for Michael O’Brien. No one would admit knowing him, and he wasn’t in the directory.

I kept pressing on, meeting people in the special needs communications department (obviously some kind of intelligence agency function), radio-television-film (propaganda department), and eventually journalism. Under relentless pressure, I finally got someone to claim him.

Unidentified But Helpful Person: Would you like his phone number?
Me: Thanks, no, I have that and already called it, leaving a message.
UBHP: He has a cell number.
Me: Oh, can you give me that?
UBHP: No, but I could call it for you.
Me: Please do.

To my surprise, we reached Michael. Almost immediately another call came in, undoubtedly from some little-known war region, so we went on hold, I had to move to another room, needed to, but couldn’t find the other phone, had trouble reconnecting, and so on. Eventually, we were able to talk, most certainly being recorded by CMA operatives. I apologized; he apologized.

Then, I learned where he was, at the J. J. Pickle Campus: “All you need to do is get across the campus, head north on that same IH 35, take 183 north to Burnet Rd. Just come in the main gate [exactly where I’d been before].” We’re in building 6.

So, I retraced my previous harrowing drive, finally making it the photo shoot. I was sweaty, dehydrated, frazzled, rumpled, everything one needs to be ready for an expensive, high-stakes photo op.

Building 6 turned out to be Vertebrate Paleontology. It’s filled with fossils of creatures who blessedly never had to deal with Austin traffic, construction, vicious tow operators (I got away this time), or  gigantic campuses. I wanted to explore the building, but we (the photo crew of three and I) were after all now an hour late.

So, we moved directly into photos. Poor Michael and team must needed to take several hundred, searching for one in which I didn’t look like the after photo from the evil tow company’s crushing operation. Eventually he succeeded.

But I’m almost certain that when he said he’d gotten a good one, that he’d focused on the telescope alone, and I was out of the frame. As Dewey’s idea of end-in-view tells us, standards for success need to accommodate to changing reality. The sharks managed to stay away.

Anyway, we were done. I hope the book is a success in spite of me.

One bonus of the adventure was that I got to meet Wann Langston, a famous UT paleontologist (abov

e left). He’ll be featured in the book because of his research on fossils in Texas, which played an important role in the Museum’s early development, including my own experiences in the “Rocks and Fossils” classes.

Langston shared some of his current work on fossilized giant crocodiles from the Big Bend area. I think they were Deinosuchus. He showed us several models made from creatures with jaws big enough to swallow a man whole, especially one who by then was exhausted from his photo shoot (harder than you may think) and his explorations of the UT campus(es).

In the early 1980’s, the Quill in Alaska project was a great adventure in learning about stories, writing, computers, classrooms, Alaska village life, bush travel, and much more. Although the temperatures were often -20˚F or below, stories from that time are burned deep in my brain. I learned that stories relate our lives, but that they also shape our lives, and create endless stories to follow. 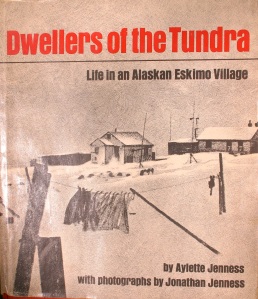 One involved a kind of networking that shows the value of being there, even in our time of electronic communications. As I recall, on a cold, snowy day in March, I had boarded a De Havilland Beaver, similar to the one shown above, to fly from Chevak to Bethel, at the head of Kuskokwim Bay. I may have been the only passenger for that short nonstop flight.

Shortly after takeoff, the pilot announced that we’d be making an unscheduled stop to pick up passengers in Scammon Bay, a village on a point jutting out into the Bering Sea. The propellers had scarcely stopped spinning when a young couple boarded. We started talking. I shared some stories about my travels to small villages around Alaska and they told me why they were flying to Bethel. They had just married, and were on their honeymoon to the big city (pop. 3000). 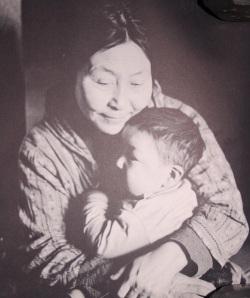 I asked them whether they knew of Aylette Jenness. She’s a writer of children’s books, photographer, and anthropologist, and more, a good personal friend. In the 1960’s Aylette had lived in Alaska in their very village for a year and a half. Based on her experiences there, she wrote a wonderful book, Dwellers of the Tundra: Life in an Alaskan Eskimo Village, with beautiful photos by Jonathan Jenness.

They were too young to have met Aylette, but they knew of her, and they cherished the book she wrote about their village. The young man asked me whether I remembered a photo of a woman in the book holding a young child. I said yes, it was one of my favorites in the book. He then stunned me by saying: “That woman is my mother, and that baby is me.” 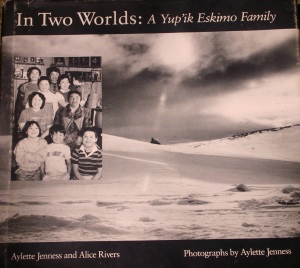 We talked the rest of the flight. When I returned to Cambridge, the first thing I had to do was to tell Aylette that story, about how the characters in her book had a continuing life and were now old enough to get married and fly to Bethel. She was fascinated and immediately said: “I have to go back!”

She soon returned to their village, one generation, and more than 20 years later. Being the writer and photographer she is, wrote a second book: In Two Worlds: A Yu’pik Eskimo Family (1989). 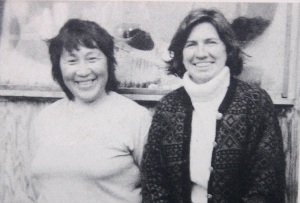 This time, the book was co-authored, with Alice Rivers, a Scammon Bay resident, shown on the left here with Aylette on the right. The change in authorship reflects both changes in the way we write about others and Aylette’s own deepening connection with the people there.

The title reflects changes, too. It uses the name Scammon Bay residents themselves use, Yu’pik, not just a broad category, like Eskimo, and everyone is more conscious of living in multiple worlds. The people and Scammon Bay are now identified by name. The books make vivid for me my time in Alaska, even though my stay in Scammon Bay itself was probably just 15 minutes.

And the photos are now by Aylette. They’re sharper than in the first book, less dreamy and more reflective of the many facets of life in modern, yet still traditional, Alaskan villages—the two worlds.

It’s now been another generation, and time for more stories and another Scammon Bay book. In the Introduction to In Two Worlds, Alice and Aylette ask: “maybe one of Alice’s daughters will write that one. Mattie? Sarah? How about it?”

I don’t think the books are still in print, but you can easily find good quality used copies online. 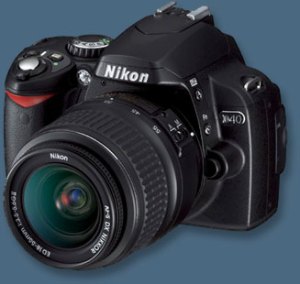 While lost amidst sorting through 30 boxes of my files, I’ve occasionally come across some gems. One is

As we do research, prepare proposals for conferences, and work with community members to document their own experiences, it’s worth thinking about alternative methods for doing and presenting research.

English’s article (available online through Sage or the UI Library) uses interesting photographs to discuss the role of the camera in inquiry. He also explores the metaphor of the photo as a way of thinking about different approaches to a research subject, foe example, the wide angle view that surveys a situation versus the telescopic that focuses in on a particular issue.