I worked on these journal issues with John Pecore, Brian Drayton, and Maureen Hogan, as well as article contributors from around the world. We’re now exploring options for developing some of the articles along with some additional material into a handbook. The series is timely given current debates about the purpose and form of education in an era of rapid technological change, globalization, demographic and political shifts, and growing economic inequities. It asks, “What have we learned about pedagogy that can support democratic, humanistic, and morally responsible development for individuals and societies?”

Progressive education is a pedagogical movement that emphasizes aspects such as learning by doing, student-centered learning, valuing diversity, integrated curriculum, problem solving, critical thinking, collaborative learning, education for social responsibility, and lifelong learning. It situates learning within social, community, and political contexts. It was promoted by the Progressive Education Association in the US from 1919 to 1955, and reflected in the educational philosophy of John Dewey.

But as an approach to pedagogy, progressive education is in no way limited to the US or the past century. In France, the Ecole Moderne, developed from the work of Célestin Freinet, emphasizes the social activism side of progressive education. Loris Malaguzzi and the Reggio Emilia approach to early childhood education demonstrates the importance of art in learning, a key element of the holistic approach in progressive education. Paulo Freire’s work in Brazil on critical literacy, highlights the link between politics and pedagogy. Similarly, influenced by his experiences in South Africa, Mahatma Gandhi’s conception of basic education resonates with progressive ideals of learning generated within everyday life, cooperation, and educating the whole person, including moral development.

It is worth noting that progressive education invariably seeks to go beyond the classroom walls. Thus, the work of Jane Addams and others at Hull House with immigrants fits, even if it is not situated within a traditional school. Myles Horton and the Highlander Folk School focused on social activism with adults, exemplifying the progressive education ideals. So too is the Escuela Nueva in Spain, Colombia, and elsewhere. The informal learning in museums, libraries, community and economic development, and online may express progressive education more fully than what we see in many schools today.

We hope that these issues will prove to be a useful resource for anyone interested improving education for a healthier world.

In my previous post on Single-payer health care: Why not?, I talked about our family’s experiences with health care in France, UK, Ireland, Italy, China, Australia, and other places in comparison to that in the US. This included health care for children and the elderly, and both minor (blood donation, physicals, skin growth removal) and major (broken hip, eye infection) procedures.

Thinking a bit more about this I realized that there were four essential facts that emerged from this wide variety of experiences. In every industrialized country except the US,

I might add a fifth point, too: The scare stories that we hear (“you have to wait forever!” “you can’t choose your doctor!”) are simply false, or they index issues that are the same or worse in the US. The information we get about health care promotes profit, not health.

There are many issues–changing demographics, new technologies, new medical knowledge, changing standards, globalization, and more–which affect health care. But the fundamental difference in the current US situation is that health care is driven by the bottom line. Insurance companies, pharmaceutical companies, media corporations, hospitals and clinics, doctors and other health care professionals, and all others involved in health care operate in a system in which rewards bear little relation to the overall quality of care or efficient use of resources.

One can debate each of the points above, but the evidence from OECD, UN, WHO, WTO, and other international organizations is overwhelming in support of them. Other systems offer health care that is more equitable, more effective, more economical, and more efficient.

So, why is single-payer, or national health care not even worth discussing? Why does the Obama plan dismiss it? Why does even public broadcasting ignore it?

I’ve been fortunate to have traveled many places, and to have lived for extended periods in China, Australia, France, and Ireland. During those travels, my family has received health care on many occasions, including for our small children in China and Asutralia, my wife in Scotland, and my 87-year-old mother in Ireland.

This health care has come in a variety of forms, including treatment for my ten-year-old daughter’s eyes at the Hospitaller Order of St. John of God or Fatebenefratelli (see left), located on San Bartolomeo, the only island in the Tiber River in Rome. That hospital was built in 1584 on the site of the Aesculapius temple.

We also faced emergency surgery for my mother’s hip at Beaumont Hospital in Dublin, Ireland and subsequent rehab at the Orthopaedic Hospital of Ireland in Clontarf (right). In China, we were served in medical facilities with separate queues for Western medicine (our choice) and traditional Chinese medicine (below left). I donated blood many times at the Hôtel-Dieu de Paris, founded in 651 on the Ile de la Cité (below right). I’ve also observed, though not had to depend upon, health care in Russia and even in economically oppressed places such as Haiti. 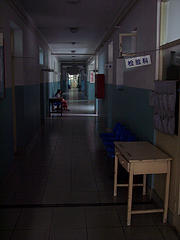 On the whole, I’ve received excellent care in a variety of conditions. Individual health providers have been courteous, knowledgeable, and dedicated to their professions. For myself and my family, the experience of care did not depend on the setting or language, but rather on the ailment or the specific people providing care.

And yet, one thing stands out: Among the industrialized nations, the United States is the only one without universal health care. All of the others provide health care for all. They also do it primarily through single-payer systems.

The United States operates instead through a complex bureaucracy of insurance policies, doughnut hole prescription drug coverage, forms and regulations galore, massive administration, unnecessary and excessive procedures, complex and confusing tax codes, leading to escalating costs and unfair coverage. The inequity of care actually costs all of us more in the end, because of lack of preventative care, inefficient delivery (e.g., emergency rooms), and lost productivity. Our system costs much more, even double that found in other countries.

If we were to find that spending a few dollars more gave us better care, there might be little room for argument. But in comparable economies, people spend much less, yet have longer, healthier lives (American Health Care: A System to Die For: Health Care for All). Why then, is the system that works in Canada, Japan, Europe, Australia, etc., not even under consideration here?

The answer is unfortunately all too obvious: Americans, unlike citizens in other countries, have ceded control of their own health care to profit-making insurance companies, hospitals, clinics, laboratories, pharmaceutical companies, and other entities. The best we can do is an occasional feeble cheer when someone asks why our government can’t even consider a single-payer system. Then we listen to an answer that mostly obfuscates and lays the blame for it back on our own timidity:

I was asked to write about a favorite teacher for a project in a philosophy of education course. The person who asked me plans to use the lenses of John Dewey, Paulo Freire, and Pádraic Pearse to look at the responses from various people. Here’s mine:

I remember many good teachers, but no one that stands out far above the rest. But I’ll pick one: Miss Dierdorf at W. P. McLean Junior High School cared about literature and history in an infectious way. She organized a class newspaper project in which we wrote and illustrated stories from Greek (and Roman) mythology. The antics of the ancient heroes and gods became as real to us as the day-to-day events around the school.

As I recall, every student felt that he or she had a vital contribution to make to the newspaper. We designed the paper, wrote and drew, because we too cared about the stories and the characters. I think that the sense of becoming engaged with the ideas and feelings of the past or faraway has stayed with me ever since.

It was interesting to see that the majority of the responses were about English teachers.

I should add that there are many mythology newspaper curriculum units available on the web and other formats, such as Greek Mythology Newspaper, by the children’s book author, Bernard Evslin. They all seem to be more sharply defined in terms of skill development and assessment than I remember the class to be.