I arrived in Athens, from Larnaca, Cyprus, following a drive from Limassol to Larnaca. I’d been up since 3 am and it was now 9 am.  I anticipated a 4-hour layover, with nothing much to report. But a delay on the Athens-Philadelphia segment turns that into a 10-hour layover, which causes me to miss the flight to Indianapolis. USAir has booked me for a 10:30 am flight from Philadephia tomorrow. This means the 27-hour travel time I had braced myself for is turning into 44 hours, assuming that everything from here on goes well.

I considered going into Athens for the day, but between the lack of sleep and my carry-on stuff, I decided to stay at the airport. Unfortunately, it’s hot and humid, so walking around isn’t a great option. Moreover, it’s very crowded and there are no places left to sit.

I’m sitting on the floor at this moment, both to get away from all the smoke and to take advantage of one of the few electrical outlets. People walking by give me amused looks, undoubtedly out of jealousy for the great spot I found. They know that the hard floor is still much better than the cramped seating that USAir offers on its 11-hour flight. All in all, the situation offers an ideal opportunity to be annoyed. (Photo shows some plane actually taking off from Venizelos airport&mdash:it’s not my plane, which is lost somewhere).

It’s probably an indication of fatigue and sleep deprivation that I’ve begun noticing odd connections. My flight is marked as Νέα, which I think is short for “nea hora” or new hour/time. Upstairs the Νέο McCafe offers surprisingly the most attractive option for sitting.

And then I discovered a new Airport Museum, which helped me forget the travel vagaries. It chronicles the history of the Spata area, where the airport is built.

Things To Do [when your plane is delayed six hours]: Visit the airport mini museum. Athens International Airport “Airport Museum” presents the continuity of life in the rural Messogia plains and its evolution through 172 archaeological findings discovered in the excavations undertaken during airport construction, and dating from the Neolithic and Early Helladic through the Post-Byzantine period.

I’m using Otenet, which claims to offer many Νέο features. So I feel I’m being immersed in neo/nea-ness, even though I’m not sure I understand exactly what’s new and what’s late, other than my plane.

I also discovered a separate exhibit on Eleftherios Venizelos, for whom the airport is named. He was a prominent statesman of the early 20th century, who helped to create the Νέο Greece we know today.

Whereas many Greek towns might be dusty and dry, Edhessa (Έδεσσα) is lush and wet. Much of it is free of cars as well. The reason is a river cascading down from the mountains to the north. It flows through the town, allowing park spaces along the banks and a complex array of paths and bridges crisscrossing the waters. Then, at the edge of the old town (Varossi), the river descends rapidly, culminating in two large waterfalls, which I came to see as fountains of knowledge.

Following the Networked Learning Conference earlier last week in Halkidiki, Greece, we had headed west through Thessaloniki to the region around Edessa. This is where Alexander the Great was born and where his father, Phillip II and Aristotle went to to school together.

It includes what are now the major archaeological sites of Vergina, the site of the ancient Macedonian royal city of Aegae, and Pella, the later capital. Alexander, of course, was the one whose conquests spread Hellenistic culture throughout Asia Minor, Syria, Egypt, and eventually the entire Persian Empire, going as far as India. Supposedly, he slept with a copy of the Iliad under his pillow throughout the campaign. His exploits might not represent the origin of the knowledge, but they certainly helped it flow and created an early version of a global culture.

The oracles of Delphi and other sites might allow Greeks to claim the fountain of knowledge. Towns with names like Grammatico make one feel that love of knowledge is intrinsic to daily life. Add in the beginnings of Western science and philosophy and the whole nation would seem to be a bubbling fountain of knowledge, if it just weren’t so sunny and dry! 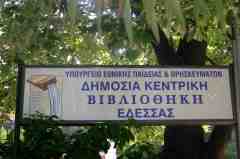 I thought we might be approaching the fountain when we came to Meixa, the location of Aristotle’s school (from the Greek schole), where Alexander had studied. But it was just north of there in Edessa, that the fountain revealed itself.

The pleasure of experiencing the water town was only enhanced for me when we visited the wonderful town library. Staff there helped us access the internet and told us more about Edessa.

The library has a unique logo combining two of my favorite things, books and water. It suggests that the ideas of Plato, Sophocles, Hippocrates, Thucydidies, Heraclitus, and all the rest flow from the library, providing pleasure for the mind as the cataracts do for both body and mind. I like the way the logo incorporates the @ sign, too. Fortunately, knowledge is never owned by any one time, place, or people, but Edessa and its library make as good a claim as any to being its source.

I was asked to write about a favorite teacher for a project in a philosophy of education course. The person who asked me plans to use the lenses of John Dewey, Paulo Freire, and Pádraic Pearse to look at the responses from various people. Here’s mine:

I remember many good teachers, but no one that stands out far above the rest. But I’ll pick one: Miss Dierdorf at W. P. McLean Junior High School cared about literature and history in an infectious way. She organized a class newspaper project in which we wrote and illustrated stories from Greek (and Roman) mythology. The antics of the ancient heroes and gods became as real to us as the day-to-day events around the school.

As I recall, every student felt that he or she had a vital contribution to make to the newspaper. We designed the paper, wrote and drew, because we too cared about the stories and the characters. I think that the sense of becoming engaged with the ideas and feelings of the past or faraway has stayed with me ever since.

It was interesting to see that the majority of the responses were about English teachers.

I should add that there are many mythology newspaper curriculum units available on the web and other formats, such as Greek Mythology Newspaper, by the children’s book author, Bernard Evslin. They all seem to be more sharply defined in terms of skill development and assessment than I remember the class to be.