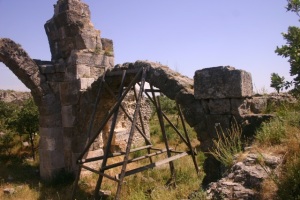 In many localities there are ancient sites one can visit. But often, these are removed from contemporary life, not only by time, but also by place. They seem to stand apart.

For example, in Illinois, Cahokia Mounds is a fascinating site to visit. It tells the story of people who settled Illinois over 1000 years ago, and created one of the great cities of the world. However, the threads connecting Cahokia to 21st C Illinois seem very thin. The site is interesting in large part because it seems like it’s from another world. Most of the links from the Mississippian and other cultures to present-day life in Illinois have been erased or forgotten.

In Turkey, however, archaeological sites seem to merge with current life. There are more here than anyone could ever visit, or even count. Ruins spill out of the official ticketed sites into the village and countryside. Modern houses are built of the same stone, and embedded in the same rocks that influenced the ancient structures. Farmers plant and harvest in the same fields, often on top of buried ruins from two or three millennia ago. Modern excavations proceed alongside contemporary uses of the same rocks or even structures. 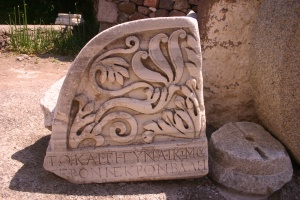 More importantly, there are ties in language and culture to the earlier Cretan, Hellenistic, Roman, Byzantine, Ottoman, and other cultures. Places have names revealing their history, and sometimes multiple names, e.g., Assos / Behramkale / Behram, for their different ties. Customs in food and dress have strong connections that are understood by locals, in a way that one would have trouble finding between Mississippian and modern-day Illinoisans.

An implication of this for the traveler is that archaeological sites exist in an array of states, but all with tangible links to the present. Some are fully excavated and interpreted, while others are submerged into the landscape. Some are outside of present-day settlements, but many are embedded within or under the present day town. Many manifest not just a single culture, but a series, for example an early settlement that became a Hellenistic temple, then later Roman baths and administrative center, then a Byzantine development, with continuing use to the present. This makes the sites seem alive and connected to our life today in a way that sites elsewhere are often fascinating, but removed as in a science fiction story about a strange foreign world. 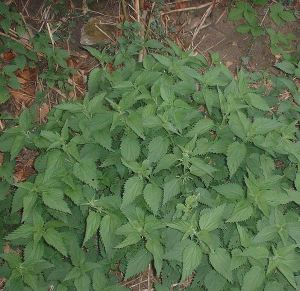 The site for Alexandria Troas is one of the largest in Turkey, nearly 1000 acres. But it’s still being excavated and most of it appears first just as some strange rocks sticking up among the vallonea oaks. The site spreads nearby, but partly within and underneath today’s town of Dalyan, Çanakkale. It’s not hard to imagine that some of the farming practices of today in that region were common two millennia ago.

Walking and clambering about the site in my sandals, I found the ısırgan otu (stinging nettle) that undoubtedly plagued early walkers in sandals. They probably enjoyed eating them as much as other modern diners and I do.

About 23 miles south by road is Appollon Sminteionin, whcih was built in the 2nd C BC city of Khrysa (present-day Gülpınar, Çanakkale). When Cretan colonists came to the area, they consulted an oracle regarding where to settle. The oracle told them to settle where ‘the sons of the earth’ attacked them. One morning they awoke and found mice chewing their equipment. They decided to stay there and built a temple dedicated to Smintheion, Lord of the Mice and to Apollo.

Sminthean Apollo is mentioned in the Iliad, Book 1:

Agamemnon had dishonoured the god’s priest,
Chryses, who’d come to the ships to find his daughter,
Chryseis, bringing with him a huge ransom.
…
Displeased, Agamemnon dismissed Chryses roughly

Chryses then prayed to Appollon Smintheionin:

“God with the silver bow,
protector of Chryse, sacred Cilla,
mighty lord of Tenedos, Sminthean Apollo,
hear my prayer: If I’ve ever pleased you
with a holy shrine, or burned bones for you—
bulls and goats well wrapped in fat—
grant me my prayer. Force the Danaans
to pay full price for my tears with your arrows.” 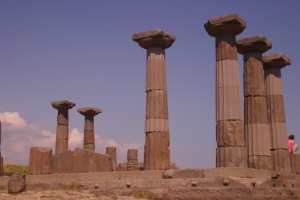 There is a walkway at the Appollon Smintheion site, which may have connected it with Alexandria Troas, just as the modern towns link today. There are no wheel ruts in the stone, which suggests that ancient people walked to and from the site.

Not much further on, Assos is one of the most impressive, and surely most photographed, of the many sites in the area. I cringe to think of how many people will fall off the edge seeking the perfect selfie.

Assos is a site that exemplifies the idea of continuous settlement and sedimentation of cultures. Modern boutique hotels and shops are built into the rocks and with rocks just as the ancient structures were. There is an old, though not as old as Assos, cami (mosque) built of stone and standing at the entrance. Although the fenced area of the site is huge, structures and rock piles spill over the edges such that it’s not clear which are archaeological treasures, which are functional structures for today, and which are construction debris.

The Assos habitation traces back to the Bronze Age, with city life from 7C BC onwards without interruption. Aristotle wrote his Politics during his three-year stay here. The missionary, St. Paul, would walk to here from Troas, 20 miles aways. Its easy to envision shepherd throughout this time guiding their sheep and goats among the rock strewn hillsides, much as they do today.

Beyond the physical though, what’s most telling about the connection to the past is the way people talk. For example, many say that local foods, dress, personal names, and even ways of socializing on Turkey’s Aegean coast can be traced directly to its Hellenistic heritage. The many other civilizations in its story have similarly shaped the rich culture.