It is generally understood that Trolls, when their territory is encroached upon by mankind, withdraw to some more secluded place. So when Eksjo was built, those that dwelt in that vicinity moved to Skurugata, a defile between two high mountains whose perpendicular sides rise so near to each other as to leave the bottom in continual semi-darkness and gloom (Hofberg, 1890).

It’s also generally understood that humans venture into the lair of trolls at their peril, and wise ones know not to walk defenseless into bottomlands of “continual semi-darkness and gloom.” But we knew of the troll ways and were not about to follow the path that the hunter Pelle Katt did in Hofberg’s fairy tale.

A Swedish friend asked why we were going to Småland, as if searching for relatives were the only thing to do there. We’ve learned there is much more, including visiting 12th century Romanesque churches and meeting local people over coffee afterwards, exploring lush forests with gorgeous lakes, taking walks in well-designed parklands, looking at quaint, red wooden farmhouses, and walking through villages with winding, cobblestone streets. But we were intrigued by the descriptions of Skurugata, which seemed of a different order of things.

Skurugata is about 13 km NE of Eksjö. To get there, we drove past lovely little farms with red houses and barns, cows, and piles of logs from the abundant woods.

The walk to Skurugata itself started off simply enough, a winding path through the woods, with moss-covered rocks and ferns. But it soon descended into a narrow ravine, with straight granite sides. At times, there was little more than 20 feet separating the sides, which rose to 50 feet and more. The walking was a bit tricky, since the rocks were moss-covered and slick from rain. There was also some climbing and descending that benefitted from the use of hands.

It was easy to imagine getting a foot caught in a crevice or losing one’s balance on an unstable stone. But the most dangerous part was neither the trolls nor the rocks, but the sheer beauty that made it hard to focus on walking carefully. The camera was shock-proof, but not my head.

Hofberg’s tale made me more sympathetic to trolls than I’d been before. Being forced out of one’s home is never good, even if it’s to a place as beautiful as Skurugata. He relates that every year a whole battalion of Småland grenadiers would march through Skurugata, beating drums and blowing horns, and occasionally firing volleys. Who knows how the poor trolls suffered through that! And Pelle Katt was no saint either.

We tried not to add to the troll’s’ misery, although we did intrude on what seems like a sacred space and took pictures that only hint at its beauty.

[Double-click on any photo to enlarge it.] 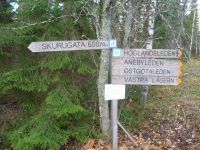 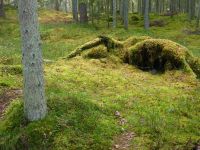 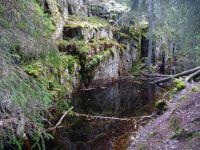 Pool that appeared to block our path 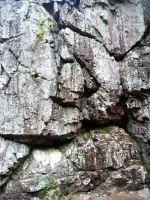 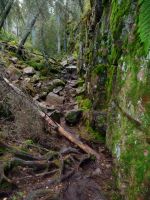 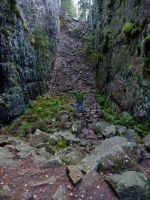 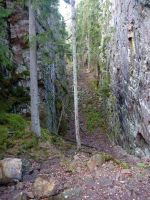 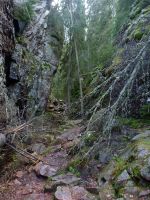 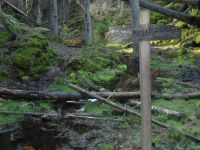 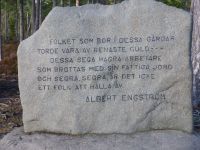 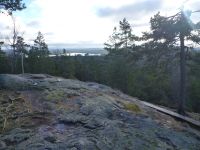 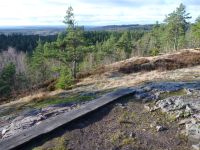 2 thoughts on “Searching for trolls in Skurugata”