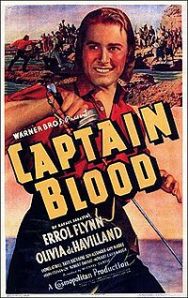 We just watched the DVD version of Captain Blood, the 1935 adventure movie based on Rafael Sabatini’s novel.

Except for the numerous comments from the female members of the audience about Errol Flynn (“Oh! He is rather dashing, isn’t he?” “He has such a wonderful smile!” “Well, I have to admit, he is handsome!”), it was very entertaining. Captain Blood is a great movie, the forerunner of the eight films co-starring Olivia De Havilland and Flynn, as well as a major shaper of the whole adventure genre.

For our family, any movie starring Olivia De Havilland is special. In case you don’t know, we go way back.

In grammar school, Olivia was just a year ahead of Susan’s mother, Rhoda, who was in the same grade as Jane Eyre (I mean, Olivia’s sister, Joan Fontaine). They’ve maintained a connection ever since. On the other side, my mother feels a special connection, because she went to college in Milledgeville, Georgia, the home of Margaret Mitchell, who wrote Gone with the Wind, starring Olivia as Melanie.

Throughout her career, Olivia has always exemplified both excellent acting and the highest moral standards. She sought roles that expanded artistic limits, but  also promoted social good. She was successful in a lawsuit to secure greater creative freedom for performers. This led to the De Havilland law, which imposes a seven-year limit on contracts for service. She was the lead in The Snake Pit, one of the earliest films to attempt a realistic portrayal of mental illness. In 2008, she was awarded the US National Medal of Arts.