Today marks the 100th anniversary of the Springfield race riot. The riot was a shameful episode in America’s history. It occurred in the Illinois State capital and the hometown of Abraham Lincoln. Anti-black riots followed in East St. Louis and Chicago. There was one positive outcome: In 1909, reformers called a small meeting to address the violence and racism, out of which grew the National Association for the Advancement of Colored People, the nation’s oldest and largest civil rights organization.

The riot, and the subsequent rationalizations, is an event that I’ve found especially disturbing. It’s a frightening reminder of the consequences of racism and mob violence. It may touch me more not only because I live nearby, but also because my father’s family was from Springfield. Although the events happened long ago, they remind us to look closely at our contemporary beliefs, attitudes, and values about race, immigration, and people we see as “other.”

On the evening of August 14, 1908, a race war broke out in the Illinois capital of Springfield. Angry over reports [later revealed as a concocted allegation] that a black man had sexually assaulted a white woman , a white mob wanted to take a recently arrested suspect from the city jail and kill him. They also wanted Joe James, an out-of-town black who was accused of killing a white railroad engineer, Clergy Ballard, a month earlier.

Late that afternoon, a crowd gathered in front of the jail in the city’s downtown and demanded that the police hand over the two men to them. But the police had secretly taken the prisoners out the back door into a waiting automobile and out of town to safety. When the crowd discovered that the prisoners were gone, they rioted. First they attacked and destroyed a restaurant [top left] owned by a wealthy white citizen, Harry Loper, who had provided the automobile that the sheriff used to get the two men out of harm’s way. The crowd completed its work by setting fire to the automobile, which was parked in front of the restaurant. 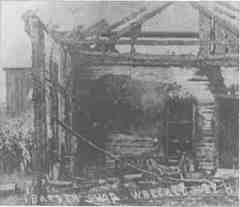 In the early hours of the violence, as many as five thousand white Springfield residents were present, mostly as spectators. Still angry, the rioters, minus most of the spectators, next methodically destroyed a small black business district downtown, breaking windows and doors, stealing or destroying merchandise, and wrecking furniture and equipment. The mob’s third and last effort that night was to destroy a nearby poor black neighborhood called the Badlands. Most blacks had fled the city, but as the mob swept through the area, they captured and lynched a black barber, Scott Burton, who had stayed behind to protect his home [hanging tree, above right; barber shop, left].

The pattern of attacks supports [one black resident’s] opinion that black success brought danger. The first area targeted was the black business district. The two blacks killed were well-off, successful businessmen who owned their own homes. All of those targeted for hit-and-run attacks were also well-off. Although what triggered the riot may have been anger over black crime, very clearly whites were expressing resentment over any black presence in the city at all. They also clearly resented the small number of successful blacks in their midst.

See more at The Springfield Race Riot of 1908 and A Minute With Clarence Lang.