My friend and former student Beena alerted me to a wonderful blog post by Nicholas Delbanco. It’s a celebration of Wellfleet’s Transfer Center from U-M’s alumni publication Michigan Today: The order of ordure.

Driving down the hill away from the landfill, windows shut against the stench of it, I congratulate myself on having completed my task. I am, after all, helping to organize the planet. “The order of ordure” — I try out a phrase — “the composition of compost, the transfer of trash, the way of waste.” There’s something deeply gratifying about such distribution. Every item has its place and all can be redeemed.

This is absurd, of course. We make small difference here. Rumor has it that the 16-wheelers hauling garbage lump everything together after our dutiful sorting. And day by week by month the waste accumulates again. But as the air clears and I open the car windows, I’m seized by the conviction that what I’ve done is similar to what I also do each day: distribute words on a page.

Delbanco writes as a summer resident. As a full-time one, I can confirm what he says, and perhaps add a little texture. During the winter, the Transfer Center remains as the top attraction in town, the place where you see your friends and catch up on gossip. But it loses the bustle that Delbanco sees and definitely the stench.

By the way, I don’t experience that smell as a uniform aroma, but as one that guides you through the site, noticeable at the bottle and cans area, a little stronger near the discarded sea shells and fishing gear, not so noticeable at the metal recycling or the mulch pile.

Delbanco also emphasizes the dropping off aspect. That’s of course the reason for the very existence of the Center. But he may not appreciate how much some clients (the “cadre of those who pick over what others discard”) find to remove from the site. Only some of those do it for cash.

We go to the dump (aka 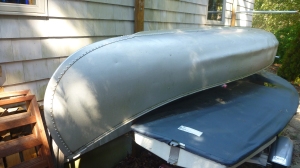 Wellfleet Transfer Center and Recycling Station) with our Forester filled to its gills, but often return with just as much stuff. That leaves me with mixed feelings. On the one hand there’s a sense of the great find, such as the canoe we retrieved, which only leaks a little. We typically come home with eight buckets of compost or mulch for the garden. The swap shop often has the perfect item that even Amazon can’t find.

On the other hand, there’s a feeling of complete failure to progress. We use up Energy to make the exchange, but the Conservation of Mass is maintained.

Delbanco suggests that transferring and recycling trash is not so different from doing the same with words. He mentions E. E. Cummings in that regard, but may not realize a connection to Wellfleet.

William Slater Brown was a friend of Cummings, best known as the character “B.” in Cummings’s  The Enormous Room. That book details their temporary imprisonment in France during World War I. B. was arrested by French authorities as a result of anti-war sentiments he had expressed in some letters, and Cummings stood by him. Today, Brown’s daughter Rachel is a prominent photographer living in Wellfleet.