And the end of all our exploring
Will be to arrive where we started
And know the place for the first time.

I knew the name, György Kepes, mostly because he’s one of those notable Wellfleetians, but I can’t say that I knew much about him until recently.

My exploration started with a “Picture of the Day” in New Scientist, showing one of his reverse silhouettes, and describing an exhibition of his works at Tate Liverpool. More images are shown in the slide show above, on the website of the new Kepes Institute, Museum, and Cultural Center in Eger Hungary, and at Hommage à György Kepes. 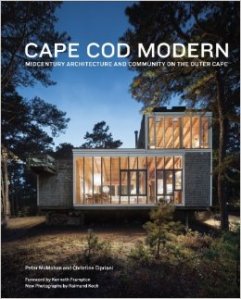 I looked up Kepes in the wonderful new book by Peter McMahon and Christine Cipriani, Cape Cod modern: Midcentury architecture and community on the Outer Cape. There are interesting stories and photos there about the house that Marcel Breuer designed for the Kepes family on Long Pond, and about their interesting relationship with Wellfleet and Cambridge, Mass, including living in Wellfleet without a car. There is some about his wife, Juliet Kepes, who has had considerable accomplishments of her own, including winning the Caldecott Award for Five little monkeys. They had met in London when she was then 17-year-old Juliet Appleby.

I then started examining more of the Kepes art, writings, and history.

The Wellfleet library may be small, but it’s an excellent source for this kind of investigation. It has many books by György Kepes, including his Vision + value series. As I read through the contributors, I couldn’t believe what I saw.

Kepes (1906-2001) was a Hungarian-born painter, photographer, designer, filmmaker, educator, and art/design theorist. As a young artist, he was concerned about the relation between art and social justice, seeking to alleviate “the inhumane conditions of the Hungarian peasantry.” He followed László Moholy-Nagy to London, and later, to teach design at the New Bauhaus in Chicago and later founded the Center for Advanced Visual Studies at MIT.

Visual communication is universal and international; it knows no limits of tongue, vocabulary, or grammar, and it can be perceived by the illiterate as well as by the literate (Language of Vision, p. 13).

There are many reasons to question that bold statement, and Kepes must have done so as well. While at New Bauhaus he developed ideas about design theory, form in relation to function, and the “education of vision.” This implies that although visual communication may be universal it is not immediately apprehended. Kepes’s teaching and writing, including the anthologies he edited argue for it as something to be studied and learned. Kepes goes on to say: “Visual language must be adjusted, however, to meet its historical challenge.” This challenge is to reunite people and knowledge, to establish a more integrated being in a changing world.

What especially struck me about Kepes’s work was how much it tied together disparate threads in my own life. He saw fundamental connections between people in fields that are often considered to be far apart. In exploring his work I felt that I was getting know a new friend, but also, as Eliot suggests, getting to know myself better as well.

Kepes’s Bauhaus strand is strong in Wellfleet, including in the life and work of friends Ati Gropius and John Johansen, Marcel Breuer, Walter Gropius, Serge Chermayeff, Paul Weidlinger, and others. He worked with science educators, such as Gerard Holton and Philip Morrison. He was involved in the development of computer sciences, especially regarding data visualization, and worked with Norbert Wiener and Jerome Wiesner. He worked with psychologists, including Rudolf Arnheim and Erik Erikson, mathematicians–Stanislaw Ulam, biologists–C. H. Waddington, communications theorists–Marshall McLuhan, artists–Piet Mondrian, Mark Rothko. And he is most strongly identified with designer/theorists such as Christopher Alexander, Buckminster Fuller, and Charles Eames. Thus, the worlds of art, science, education, technology, and social justice were in the same mix. This can be seen in his exhibition/book, The new landscape in art and science, in which artwork was interlaced with images from x-rays, stroboscopes, electron microscopes, sonar, radar, telescopes, and infrared sensors.

Some more examples are his reverse silhouettes. Using a technique that has become a children’s museum staple, Kepes made “photograms” by arranging objects directly on top of light-sensitive paper and illuminating them. I wish I could see the new display in Liverpool, but in lieu of that am enjoying the art and ideas in his many books. These ideas are still fresh and have inspired many others, including the whole field of computational aesthetics (see for example, Form + code)