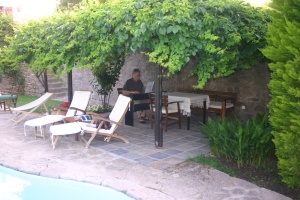 Given the many enticements, meetings, and demands of travel, I’ve found it difficult to play piano as much as I’d like. But the universities have been very accommodating with their practice rooms. And I’ve even found pianos in unexpected places.

One was in the garden of the lovely hotel, Assos Alarga. With only three rooms, i’ts billed as “the smallest hotel.” The grounds of Assos Alarga were an ancient stone quarry, providing material for the development of Assos, where Aristotle taught biology (my major subject in college). The hotel building is made of stone, which seems to blend into the ruins of Assos. 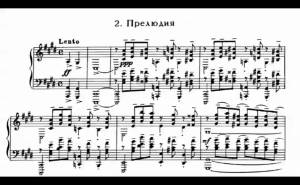 Our hosts had a small collection of sheet music. I couldn’t believe at first the piece I saw on top. It was one I have on my list to learn, Rachmaninoff’s Prelude in c♯.

That prelude has a long history for me. My father sold pianos. When a customer asked to see a piano, especially a grand piano, but was too shy to play it, he would play the first two lines of the piece. Even if you can’t read music, you can see from the score the dramatic contrasts between the thundering ff (fortissimo) chords and the ppp (piano pianissimo) echoes. You may also appreciate the large chords and jumps from low to high notes.

Dad could play those first two lines very well. Then, he’d invite the customer to try the piano themselves. He was lucky that they didn’t ask him to play more, because he couldn’t play it and had just memorized that one section. As a child I learned a transcription of the piece into d, but never the original. Seeing the music in this unexpected location, I felt that I’d been given a message that it was time for me to really learn to play it.

I only had a brief time to play in the garden, and mostly stumbled through some Chopin waltzes I had worked on before. But just being there was magical. I felt connected to the long history of Assos and to the music of Turkey. There are the many ethnic traditions of music within Turkey, but also a strong tradition of Western classical music.

Thinking about music in Turkey, I began to listen more to Fazil Say, a genius composer/performer, who crosses many musical boundaries. You can see much of his work online, including performances of his own compositions, classical renditions (exquisite performances of Bach), Gershwin, and hybrid pieces such as his jazz version of Mozart’s Rondo all Turca.

To me, Say’s gestures occasionally seem overly dramatic and his interpretations equally so, but he’s always fascinating to listen to. He’s clearly one of the most talented modern composers and performers anywhere, someone that Turkey may justly celebrate as part of their contribution to world music.

I like many of his works, but Kara Toprack (Black Earth) is especially haunting: