What makes a group of people constitute a community? The most common definitions focus on similarities of place, interest, or practices. For example, Wikipedia says,

Human communities may share intent, belief, resources, preferences, needs, and risks in common, affecting the identity of the participants and their degree of cohesiveness.

The standard view thus sees cohesion growing out of sameness. Can we even imagine a community emerging out of difference?

In his book on nationalism, Benedict Anderson writes that a nation

is imagined as a community, because regardless of the actual inequality and exploitation that may prevail in each, the nation is always conceived as a deep, horizontal comradeship. Ultimately it is this fraternity that makes it possible, over the past two centuries, for so many millions of people, not so much to kill, as willingly to die for such limited imaginings (p. 7)

For Anderson, all nations, indeed, all communities are imagined; they are distinguished by the “style” in which they are imagined.  In many countries, the imagining consists of defining a personal archetype, a single language, a religion, and a national mythology, which extends the nation’s history to a time long before anyone did imagine a nation. 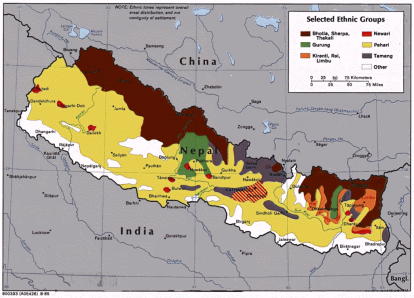 But comradeship is neither guaranteed nor does it require, more objectively measured, or even imagined, similarity. Instead, Anderson’s imagined community is more akin to Anthony P. Cohen’s (1985) idea of community of meaning, in which the community plays a crucial symbolic role in generating a person’s identity and sense of belonging. A community is, because we conceive it to be.

Community based on difference

If we shift from defining a community based on shared attributes (religion, interests, age, place, etc.) to thinking of it as something that its members construct, we begin to see an answer to the question posed above: Yes, community can emerge out of difference, even because of difference.

The country of Nepal is so diverse in terms of geography, history, human physical features, language, religion, arts, and more, that it’s difficult to say what constitutes a Nepali, or Nepal as a nation. What makes all Nepalis the same, yet different from people in India, China, or elsewhere? Imagining such a sameness for people Nepal is more a stretch than it is for most other countries. How might Nepalis imagine their community, if such can exist?

Instead of focusing on sameness, many in Nepal conceive of their nation in terms of its diversity. What sets Nepal apart is not that everyone looks, dresses, talks, prays, or acts the same, but that people there seek common ground through recognition of and genuine valuing of their differences. This otherwise vague goal is enacted in many concrete ways.

Celebrating and building on diversity

For example, there are 123 recognized “national languages.” Following Section 32 of the Constitution, the Language Commission aims that

every person and community will be entitled to use their language, participate in cultural life… and promote their language, script, culture, cultural civilization and heritage. Similarly, the state has a policy… to promote national unity by developing… mutual harmony, tolerance and solidarity between different languages

There is active research to find and preserve languages that may have been missed before, but now need to be recognized and protected. Contrast that with the efforts of some in the US to make English the official language. 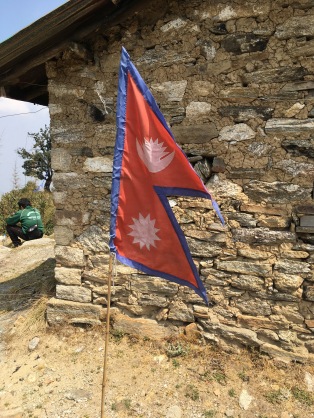 Nepal flag at the top of Shivapuri

Consider also how many Nepalis view their flag and anthem, conventional symbols of nationalism. In many countries flag waving serves to inculcate a belief in nationhood based on imagined sameness. This is not so in Nepal.

Nepal’s flag has a unique double triangular (or double pennant) shape. As such, it’s the only non-rectangular national flag. The national anthem is also unusual in both music and lyrics. “Sayaun Thunga Phool Ka” was adopted in 2006, with music by Amber Gurun. The BBC places it third on its list of “most amazing national anthems” and described it as “the only anthem normally played on a Casio keyboard.” An English translation of the lyrics by Byakul Maila includes

Echoing ideas from many others, politician Biraj Bista says, “Most people feel proud to have such a unique flag. Personally, I look at it as a symbol of unification in diversity we have in Nepal” (Nosowitz, 2018). This idea of community in diversity provides a powerful resource for the current work there on progressive education.

Implications for the US

The US is currently conflicted over the notion of community. For some, there is a desire to imagine a “deep, horizontal comradeship” based on shared language, religion, ethnicity, and social values. This leads to actions against immigrants, racial oppression, imposing sectarian religious views in public life, and absurd efforts to institute assumed, or desired, commonality of language use. In support of this sameness aim, the US Citizenship and Immigration Services recently changed its mission statement to eliminate the description of the US as “a nation of immigrants.”

For others, there is acceptance of diversity, and an understanding of how it enriches the life of society. However, that difference perspective is often accompanied by unease over perceived changes in society, and a difficulty in defining what constitutes nationhood.

Nepal provides a strong refutation of the sameness conceit and a clear articulation of a pluralistic or multicultural view of community. It shows a way in which the unity of a people, or a nation arises, not in spite of, but precisely because of the willingness to embrace difference.