On August 14, 1982, Susan Porter and I married in Aunt Polly‘s backyard in Wellfleet, Massachusetts. Susan has been a middle school teacher, a developer at the Boston Children’s Museum, a research supporter at the University of Illinois. She was active with UC Books to Prisoners, a project providing books to Illinois inmates by mail and operating libraries in two local county jails. Today, she is a community leader in Wellfleet, active with many organizations, and is now President of the Friends of the Wellfleet Public Library. 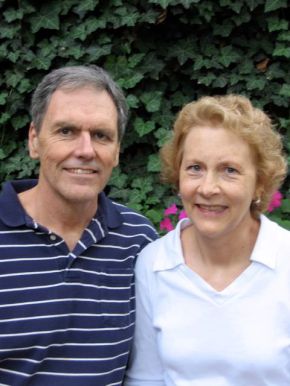 We have two children, Emily and Stephen, who both grew up in the Champaign-Urbana area. They went to Leal Elementary and University Laboratory High School, but also spent time in other schools, as in Brisbane, Australia.

Our daughter Emily earned a BA in History at Williams College in 2007 and a PhD in European History at the University of Minnesota, focusing on children’s literature in 19th century Germany. She’s now an Assistant Professor at the University of Minnesota, Morris campus. Our son Stephen graduated from Yale, worked for a year with Americorps as a patient navigator for a Russian language community, and later taught English in Moscow for a year. He’s now in a Slavic Studies program at Columbia.

Susan and I now live in Wellfleet, Massachusetts, too far from family and friends!

But we’re surrounded by new friends, some going back more than 40 years. We’re active in canoeing, road races, and other outdoor activities.