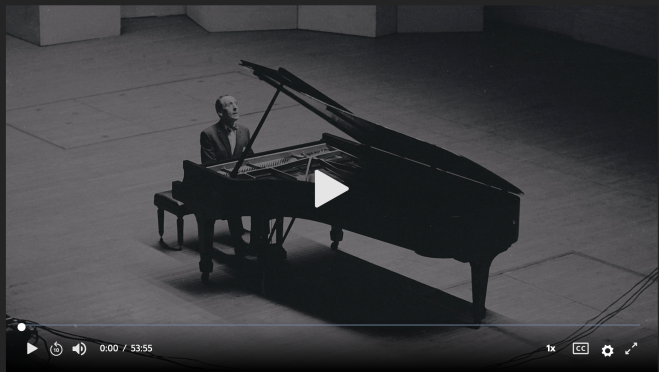 In 1986, Vladimir Horowitz,  came out of depression and semi-retirement. He re-entered Moscow after 61 years to deliver one of the best piano concerts ever.

A PBS special includes much of the actual performance and fascinating background on the politics, his personal life, and the music.  I enjoyed it on many levels.

My Dad would have loved it, too. He had died 17 years earlier, but he was a big fan of Horowitz’s, and of course Steinways, which he sold in his piano store. He also hated and feared the USSR. He would have totally understood the requirement to have Horowitz’s personal Steinway shipped to Moscow under Marine Corps guard.

I like the fact that Horowitz, especially this late Horowitz, chose mostly intermediate level pieces, especially the Chopin and the Mozart. I can at least play at many of them, but he shows how they can really be played. I’ve been working on the Schumann Träumerai (near the end) for 67 years. Listening to this concert just made it better.

Horowitz didn’t strive for virtuosity (the “pyrotechnics”) as many young, modern performers do. He lets the music speak. He makes more mistakes than most champion performers would do, but they’re totally immaterial. As some of the commentators point out, he never forces the notes.

The show is available through PBS online until February 20 (click on the image above). I hope you enjoy it.