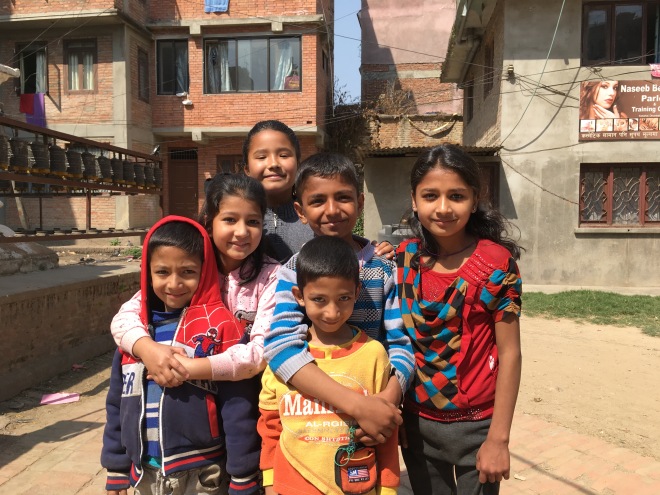 The six kids above are the ones I see most often in the courtyard. On Sunday they were shooting a rubber band chain onto the stupa. It was a good game except that the chains would hang up out of their reach.

They could climb the lower part of the stupa (left in the photo), but the upper part is a smooth dome. Also, there are many electric wires that can catch the chains. You can see some of those in the photo.

The children invited me to shoot one of the chains. I was a failure compared to any of them. But I had a super power, about four feet extra reach. So I climbed up to recover the captured chains.

When I asked to take a photo, the girl in red had just gotten on her bike and was about to ride off. She called out “Wait! Wait!” to be included.

This photo says a lot to me. Notice the arms around each of the twin boys. That’s very common here, as well as the mutual efforts to include everyone in the play, even me. Notice also the generous, but slightly mischievous smiles on each of their faces.

You can see one of the rubber band chains in the left hand of the 12 year-old boy.

As I left, I tried my very best Nepali, “Pheri bhe-ṭaūlah (see you later).” The oldest girl said essentially, “Huh?” I was saved by the same 12 year-old boy, who explained that I was trying to say “Pheri bhe-ṭaūlah.” They all smiled and waved goodbye, wondering what I could have been saying.

The photo is a large format. If you click twice on it, you can get a closer view.