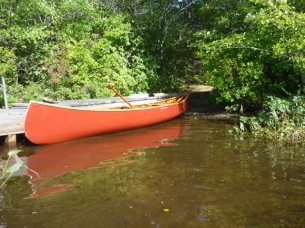 Setting out at Gull Pond 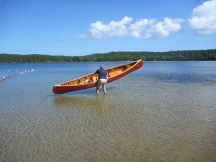 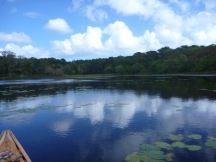 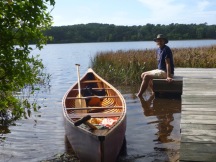 Pause for a swim

Not long after I was born, the Chestnut Canoe Co. in Fredericton, New Brunswick built a 17′ 2″ Prospector model canoe. Chestnut was a leading builder of wood-and-canvas canoes, which unfortunately failed with the onslaught of inferior aluminum, fiberglass, and rubberized plastic imitations.

The Prospector design is awesome. With no keel, wide ribs, and high gunwales, it can tackle whitewater that flips kayaks and rafts. It can carry two large people and a summer’s worth of gear, or as many as four adults without swamping. It’s quiet, strong, beautiful, and easy to paddle. It can take a sail or motor. And it’s light enough to carry on a portage trail. No design is perfect, and no canoe can meet all needs, but this one comes very close.

I wrote earlier about the restoration of the particular Chestnut Prospector that owns me. Today, we took the aging Prospector out for a paddle. Looking at it, I can enjoy the new canvas with its new brick red paint and new decals. There are new brass fittings to replace those that had corroded over sixty plus years. There are two new ribs and a new portage yoke, many new screws, and new varnish.

It feels like a new canoe. However, the remaining parts though serviceable for now, show signs of age, and might need to be replaced in a future restoration. Is it simply a fixed up old canoe? Or, is it a new one? Could a time come when I’d no longer feel that it’s the same canoe that Chestnut built in 1954?

Being a bit older myself, I note that I carry replacement parts, and have lost some parts from the original. And while my entire set of body cells may not turnover every seven years, cells are dying and being replaced all the time. What does it mean for something to be “the same,” when that something is changing constantly?

When Theseus returned from his successful mission to slay the minotaur, the grateful Athenians pledged to honor Apollo by maintaining his ship in a seaworthy state forever. Any wood that wore out or rotted would be replaced. Over centuries, the original parts were replaced many times. Had they kept their promise? Plutarch writes:

The ship wherein Theseus and the youth of Athens returned from Crete had thirty oars, and was preserved by the Athenians down even to the time of Demetrius Phalereus, for they took away the old planks as they decayed, putting in new and stronger timber in their places, insomuch that this ship became a standing example among the philosophers, for the logical question of things that grow; one side holding that the ship remained the same, and the other contending that it was not the same.

Is it the same ship? If not, when did it become something else? If it looks and functions more as it did in the beginning, is it more the original than if it’s not repaired? Centuries later, Thomas Hobbes introduced a further puzzle, wondering what would happen if the original planks could be located and used to build a ship. If one could assemble the old planks and other parts, would that be more the original? Which ship, if either, would be Ship of Theseus?

We took the new/old canoe out today on Gull, Higgins, and Williams Ponds. I can tell that it creaks a bit and the wood is more brittle than it once was, but so am I.

Nevertheless, it tracked as well as it ever did and handled an occasionally stiff breeze very well. The September sky was beautiful, the trees are just beginning to turn, and the birds are busy all about.

I know that I change over the years, sometimes noticeably from day to day. Can I remain the same person? Can I become someone new?

The old Prospector is still the canoe I’ve known and loved for many years. In many ways it’s a new canoe, but it still serves as the magic vessel it’s always been.

2 thoughts on “The Canoe of Theseus”