Does Time the Destroyer really exist?
When, on the mountain, will it bring /
down the fortress?
When will the demiurge overpower this heart
that belongs to the infinity of the gods?

Are we really so frightfully fragile
as Fate would have us believe?
Does the promise of childhood, the depths,
remain later quiet in the roots?

Ah, the ghost of that which is transient;
it passes through the guileless receptive ones
as if it were but a bit of smoke.

As that which we are, the driving ones,
still we are considered a custom of the divine
by the powers which do not change.

About two weeks ago, Ripley, the snow dog, came into being through an act of love and homage, only to be destroyed shortly after. The destruction was obviously part of the artwork, representing something about the fragility of existence. But “are we really so frightfully fragile as Fate would have us believe?” (Ripley is named after Ellen Ripley, who is Sigourney Weaver’s character in the Alien films.)

A three-year-old, one of snow Ripley’s co-creators, leaped into her, exploding her material being into a flurry of snow. This took what I estimate as somewhere between 7.5 and 9.5 seconds, just long enough for the horror to sink in, but not long enough to prevent it: A snow dog, who should live a week or two, lasted but a human breath. The demiurge had won. 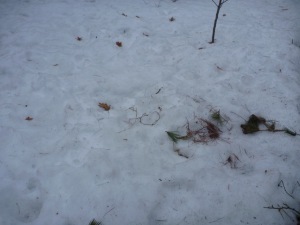 Ripley’s defiance of Time the Destroyer

Later, however, when I went out to check on the diminishing snow, I looked to where Ripley had once proudly stood. I saw her ears, her nose, her eyes, and her collar. There was even the slightest mound of snow from her fragile body.

Time the Destroyer may yet win this one in the end. But Ripley, the snow dog, lives on the soil and the plants attempting to break out of winter. The “promise of childhood … remains later quiet in the roots.” His spot in the yard will not disappear and his memory is now part of Ripley himself. Perhaps Rilke is right that “the ghost of that which is transient; it passes through the guileless receptive ones as if it were but a bit of smoke.”