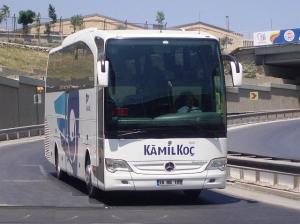 I’ve been impressed by the public transport in Turkey.

Turkish Airlines was named the Best Airline in Europe for the third year in a row by customers in the 2013 World Airline Awards. That’s not surprising. The first thing I noticed was that I could fit my knees in. 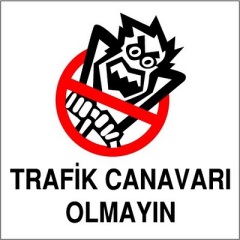 Don’t be a traffic monster

If you’re not 6’4″ you may not appreciate the difference between having 90% of the space you need and 100+%, but believe me, not having room for 10% of your thighs is a problem. In addition to that 10%, the airline offered drinks, snacks, and a good meal, even on the short flight from Bucharest to İstanbul. 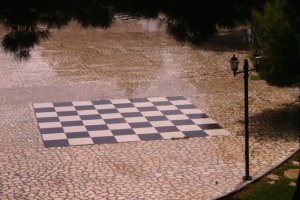 The buses are also very good. City buses run frequently, are clean and comfortable. We’ve been using a bus to the suburban area which takes about 40 minutes. It’s always on schedule and easy to use. The long-distance bus from İstanbul to Çanakkale includes a ferry ride. It has snack service, comfortable seating, even wifi and on-demand movies. 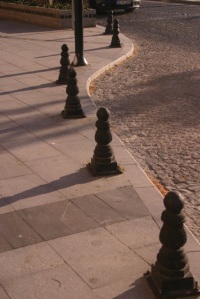 A line of black pawns 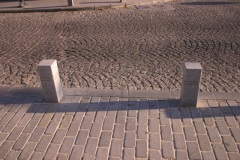 However, I’m not a fan of the street trafik (traffic), especially not as a pedestrian. Motorcycles are a special nuisance, going without regard for walkers or cars, or even the street/sidewalk distinction. There are signs telling people, “Don’t be a ‘traffic monster,” but the monsters are illiterate, so that doesn’t help much. 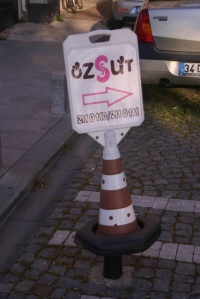 There may be a solution. The key was seeing the giant chess boards outside our apartment in Dardanos. They’re tiled spaces big enough for a person on each square. Then, I saw the bollards, which discourage at least the larger cars and trucks from driving on the sidewalks.

I began to study the bollards first as a survival skill.  Before long, I realized they were all chess pieces and that I was immersed in a giant chess game. There were the familiar pieces, such as pawns, bishops, and rooks, but in addition, the traffic monsters, and the targets, otherwise known as people. 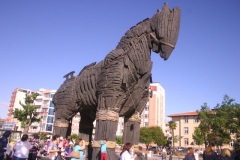 Kordon horse, from the movie

Çanakkale is not far from Troy. So, one of its attractions is a Trojan horse, which stands guard along along the kordon (beach front). The Çanakkale horse is all the more famous because it was the one used in the movie Troy. Brad Pitt, a lead actor, donated it to the town after the movie was filmed. Perhaps my chess game against the trafik could be aided by a knight on that horse.

The goal of this game is to stay alive, fighting the odds for this technique of population control. This means relying whenever possible on the chess pieces. Unfortunately in Çanakkale, it also means being careful about where and when to stop to view the beautiful Dardanelles, the flowers, and the fascinating life on the kordon. 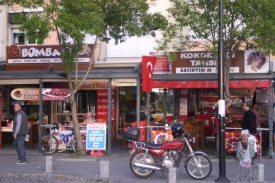 Shops along the kordon 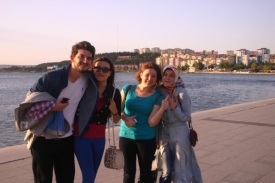