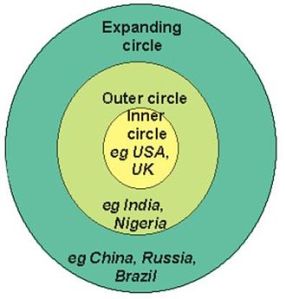 The concept of World Englishes has been much studied by groups such as the International Association for World Englishes (IAWE), including my own colleagues at the University of Illinois. They consider localized English in global contexts, how it’s spoken and written, along with pragmatic factors such as appropriate use and intelligibility.

When traveling, I notice these issues frequently on a very personal level. For example, one day we were waiting for the elevator (i.e., lift) in a hotel in İstanbul. A couple of people from Munich came up to us to ask about the hotel. We described our room, and then began to talk more generally. They then asked where we were from and were surprised to hear that it was the US. They had judged by our accent that we were from the UK.

In this case, I don’t think the confusion was due to our having British accents. Instead, it was from having enough interactions with speakers of various World Englishes that we had unconsciously muted our marked US accents, especially my Texas talk. That possibly more subdued and more clearly articulated dialect has proved necessary in travel and work with international colleagues.

Another example arose later the same day. A different couple approached us on a sidewalk, with one saying in a strong Arkansas accent, “Are y’all cruise people?” What was interesting then is that we were marked by appearance as possible cruise people without having said a word, an example of non-verbal language. Moreover, Susan couldn’t understand them, but I, who had grown up in a neighboring country, could.

We had to confess that we weren’t cruise people, but we were able to tell them where their ship was docked. It was a 2000 passenger Norwegian cruise ship about three blocks away. I’m not sure that it was the Norwegian Star, but it was one that looked similar to the one shown here. In any case it was hard to miss, but we were happy to help them find their way home.