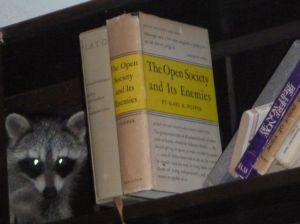 We had a visitor last night. Like a previous one of her kin, she managed to visit every room, leaving small gifts on the floor and thoughtfully rearranging books, wall hangings, pottery, and other items.

This one had a special talent for philosophy. She was particularly interested in Karl Popper’s critique of teleological historicism and his reanalysis of Plato, as he develops in The Open Society and Its Enemies. One question she wanted to explore was whether raccoons enter houses with the intention to be ornery or do they just fall in because I haven’t come up with a way to secure the skylight screen. Popper would argue that there are genuine alternatives in history, multiple causal processes, and a role for raccoon intentionality. But I’m not sure how that helps to answer the question.

Hoping to appeal to her desire for conscious agency as well as her stomach, I set out some cut apples and banana peel in a trail across the counter to an open window. But her drive to remain curled up in the philosophy section was too strong, and she ignored all my offerings.

I noticed that our visitor preferred to stay in the Popper section and didn’t give any time to poor Ludwig Wittgenstein, his antagonist in the famous confrontation at the Cambridge University Moral Sciences Club. As there was a wood stove in the room, I thought I might reason with her using the fireplace poker, just as Wittgenstein had done with Popper in 1946. In that event, Popper stormed out, which would have been a pleasant outcome in this case, given my moral perspective.

But she held her ground, insisting that Wittgenstein’s view of formal philosophy as nothing but language games was an abdication of moral responsibility, that the Open Society could not be maintained without strong raccoon ideals. I argued that “open” in this case did not include raccoons. This led to a discussion about the danger of a priori categories and the need for dialogue across differences. While I appreciated the general argument, I felt that Wittgenstein might have a valid point in this case, and that it was time to terminate the game.

I assembled a set of tools in order to move to the next stage in this debate: the poker, large leather fireplace gloves, a broom, a blanket, a powerful flashlight, fresh fruit to appeal to her culinary desires. All I was missing was the courage to grab on to her and show her to the exit. As I said above, poking with the poker had no effect.

Fortunately, we had some helpers with more resourcefulness and courage than I. It took all three of them and a large plastic tub, but they managed to corner the raccoon in the tub, cover her with a blanket, and take her to the woods, where, I believe, her interest in environmental philosophy can be more profitably continued.

4 thoughts on “Popper, Wittgenstein, and the raccoon”