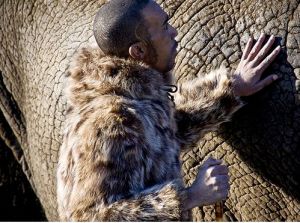 [These comments grew out of a discussion in our Community Engagement class.]

The parable of the blind men and the elephant (see also the Wikipedia entry) has been told and retold many times. In that story, blind men feel different parts of the elephant, each concluding that the elephant is only what they directly feel.

For example, as John Godfrey Saxe’s poem re-telling would have it, different men saw the elephant as a wall, a snake, a spear, a tree, a fan, or a rope. E.g.,

The Second, feeling of the tusk,
Cried, “Ho! what have we here
So very round and smooth and sharp?
To me ’tis mighty clear
This wonder of an Elephant
Is very like a spear!”

The story reminds us that reality may be viewed differently depending upon one’s perspective. But our fascination with it reveals that we, too, see only part of reality, making judgments about blindness based on not seeing actual blind people encountering actual elephants.

In Letter on the Blind for the Use of Those Who See, Javier Téllez takes the story in a new direction, by asking blind people to interact with a real elephant. (interview with Téllez and curator Mark Beasley)

As quoted in Greg Cook’s review in The Boston Phoenix, participants said things such as:

“It felt like a tire, a car tire, except it was warm. It wasn’t a good feeling.” “When I first went to touch it, I bumped into it, and I thought it was the wall. It felt like thick lizard skin.” “I felt an ear that felt like a hat and a trunk that felt like a hand.” “You feel the ridges and the bumps. And you can feel the life pulsing through it. You can’t hide it.” “It felt like I was touching some curtains.” “I imagined it to be quite large, but I couldn’t really sense how wide or tall it was. . . . And then I couldn’t tell if the damn thing was breathing or not breathing.”

Despite all the many tellings and re-tellings of that story, the actual blind people saw the elephant in ways not included in the standard versions of the parable. They helped me to see both blindness and elephants in new ways.

It’s good to recognize that people see the world differently, but to know what those different ways really are, we need to ask.

2 thoughts on “Blind people and elephants: We need to ask”