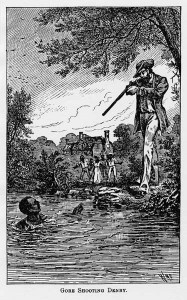 A recent political cartoon showed an ayatollah in Iran pointing a gun at an unarmed citizen, who feebly tried to respond with a pointed index finger. It implied that if Iranians had gun rights they’d have a better chance of standing up to tyranny. The implication was that our Second Amendment had been written for a similar purpose: to protect ordinary people from governmental oppression.

But whatever merits or problems one might see in the Second Amendment today, it’s worth remembering that it was not conceived to enable people to stand up to government, but for precisely the opposite purpose. James Madison wrote the Second Amendment to reassure Southern states that Congress would not disarm their militias, which they deemed to be necessary for slave control. Thus, the amendment ensured that people in power could continue to oppress, not the other way around. For Iran today, this would be akin to guaranteeing that the ayatollah shown in that cartoon would always have a gun, while the citizen did not. 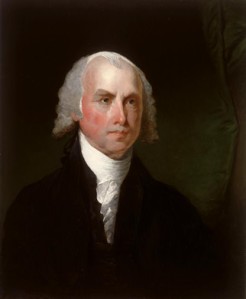 The Constitution required ratification by at least nine states. Eight had ratified it, but anti-Federalists in other states held sway. Virginia was divided, with George Mason and Patrick Henry arguing against ratification. They raised the specter that Congress might refuse to call forth the militia to suppress a slave insurrection or could even disarm the Southern militias.

Although the Federalists prevailed, James Madison’s career was damaged. In order to resurrect it, he promised that he would support adding a bill of rights including this provision: “A well regulated Militia, being necessary to the security of a free State, the right of the people to keep and bear Arms, shall not be infringed.”

Carl Bogus (1998) shows that Madison wrote the amendment for the specific purpose of assuring his constituents that Congress could not use its new powers to deprive the states of an armed militia. Their primary concern was not that Congress would disarm the militia and thereby prevent hunting, self-defense, national defense, sport shooting, or resistance to governmental tyranny. Instead, it was that disarming the militia could bring an end to slavery. Despite later revised interpretations, the amendment did not grant individuals a right to keep and bear arms for random purposes, but instead for “well regulated” militias whose essential purpose was to prevent a slave rebellion, as happened in Saint-Domingue (now Haiti) just three years later.

As in any political arena, there were multiple interpretations and motivations at the time, as well as misunderstandings due to making sense of these more than two centuries later (Amar, 2005). A major concern in 1788 was of course the war against England and fears about future invasions. But it’s also clear that a driving force was the desire to preserve the institution of slavery, thus using guns to maintain tyranny, not just to resist it.

Douglass, Frederick (1881). Life and times of Frederick Douglass, his early life as a slave, his escape from bondage, and his complete history to the present time. Hartford, CT: Park.

3 thoughts on “Guns against tyranny?”