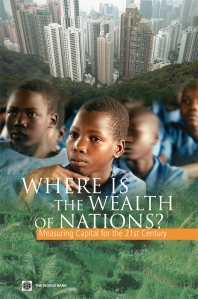 What wealth is tangible? “Tangible” means something you can see and touch, something real and substantial. When referring to nations, tangible assets include land, buildings, equipment, stocks, and cash. Assets such as culture, education, law, environment, and health are deemed to be “intangible” or even “invisible.” But in light of the recent collapse of world economic system, social justice and cultural/environmental well-being now appear as the far more tangible assets to me.

Various tools have been proposed to provide more complete and useful measures of wealth and productivity. Along this line, Sharon Irish recently shared what she’s learned about the American Human Development Project.

via About the Project — Measure of America: American Human Development Project.

It reminds me of the World Bank’s report “Where is the Wealth of Nations?”, which shows that the generators of development are things like the rule of law and a good school system. It also explains why say, a Mexican migrant to the U.S. is five times more (economically) productive than one who stays home. See also Ronald Bailey’s commentary on the report.

Devising better tools is not easy. There are serious debates about how to factor in human capital, biodiversity, global warming, civil rights, arts, and other issues. But if anything good can come from the economic collapse, it might be a better understanding of what wealth we really do have versus that which is ephemeral. We might then realize that investing in children makes far more sense than investing in obscene bonuses for financial tycoons.

One thought on “What wealth is tangible?”