Are we beings who pass through a natural world, or are we part and parcel of it? Arthur Bentley asks that question in his 1941 essay, “The Human Skin: Philosophy’s Last Line of Defense.” He suggests that philosophers position the person on one side of a boundary (the human skin) and nature on the other. This artificial separation leads to confusion about cause and effect and about our place in the natural world.

Recent biomedical research supports Bentley’s rejection of the human skin boundary as an artificial distinction. One such set of findings has been called the “Pylori paradox.”

Robin Warren and Barry Marshall were awarded the Nobel Prize for their work showing that Helicobacter pylori, causes inflammation of the stomach lining, and potentially ulcers and stomach cancer. The bacterium, H. pylori has been a resident of the human stomach for thousands of years, is still common in the US, and up to 90% of adults in developing countries may be infected.

Improved living conditions and increased antibiotics use have led to a decrease in H. pylori infections. this sounds good, but as fewer children carry the bacterium, asthma incidence has risen. Recent research has also shown that while H. pylori harms the stomach, it protects the esophagus:

Beside asthma prevention, “H. pylori could be beneficial in other ways. For instance, we found that people with the bacteria were less likely to have had recent bouts of wheezing, allergic rhinitis, dermatitis, eczema or rash,” said Yu Chen, the coauthor of the study. “Other studies have shown that it may protect against gastroesophageal reflux disease and esophageal cancer.”

Researchers now characterize H. pylori as a symbiont, an organism that survives because of the environment our bodies create for it and in turn regulates that environment. Even though its harmful effects are well-documented, it may provide overall more benefits, especially so because the benefits accrue more to children. 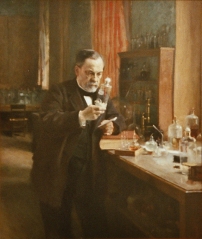 Meanwhile, other research shows that a universal childhood virus is inherited in DNA.  Nearly everyone is infected with HHV-6 virus. This is a herpes virus that causes roseola–including a characteristic rash, high fever, and sometimes respiratory or stomach problems. It appears that HHV-6 is integrated into our very chromosomes. Thus, it’s part of the genetic ID for humans, and is passed on through the egg or sperm. As Pogo said, the enemy in this case is definitely us.

These and similar insights from biomedical research remind me of Oliver Sacks’s discussion in Awakenings. He quotes Pasteur’s dying words as, “Bernard is right; the pathogen is nothing; the terrain is everything.” Despite his ground-breaking work on bacterial factors in disease, Pasteur admits in the end that the context cannot be ignored.

The recent research suggests a corollary: It’s not just that the terrain affects how we and the pathogen interact; we and the pathogen are the terrain. In The Triple Helix, Richard Lewontin puts it this way, “Just as there can be no organism without an environment, so there can be no environment without an organism.” Despite our attempts to separate them, organisms (including ourselves) and environments mutually constitute each other. We are dealing here with living things.