Be sure to read Part I: Stepping into a photo story, before this part. 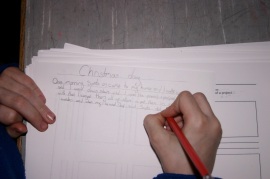 In a recent classroom visit, I saw many of the benefits of digital storytelling: The students were active and deeply involved in learning; they were developing literacy and technology skills; they were building confidence in themselves as learners and as responsible young people. It was a contemporary version of a Froebel classroom. But something happened on one visit that’s made me think again about how we all inquire and learn.

As I described in Part I, the students were asked to write about their first memory. Their stories involved family, religion, play, travel, money, holidays, toys, and other elements of childhood today. As I went from student to student I saw some interesting variations, but nothing too surprising. Then, I encountered Z.

Whereas other students had written several lines already and eagerly allowed me to photograph their texts, Z had written nothing. I aksed her whether she had a memory to write about. My paraphrase loses the full force of her story, but perhaps conveys the spirit:

When I was four years old, I heard my parents talking about Santa, but I didn’t believe it. So the night before Christmas, I waited until they’d gone to sleep, then went downstairs. I unwrapped all of the presents, including those meant for my brothers and sisters and played with all of them. Then I took the presents upstairs and hid them in my wardrobe. The next morning my Ma and Dad came and said that Santa didn’t come because I’d been bad. “And where did you put all those presents?!”

Z went on, and I wish I could have recorded her performing. I told her she had a great story, even though I secretly thought that hers might not be as faithful to the truth as the ones her classmates were writing. So, I encouraged her to write it down as the others were doing: “Let me know when you have something written and if you like, I’ll photograph yours as well.”

As L and I went around the room, we talked with each student and photographed their writing. Meanwhile, Z seemed to do the same. She was up and about more than she was sitting writing. She’d be talking to a friend, looking at the photos on their laptop, or generally enjoying herself.

I came back to her several times to ask about her writing. She assured me that she wanted to have it photographed, and I promised that I’d do that as soon as she’d written something. But each time there was animated talk, but very little writing. By the end of the class she had written some (see photo), but it was less than that of most of her classmates and certainly didn’t do justice to the oral form.

What kind of camera is that?

One time she stopped me:

Z: What kind of camera is that?

Z: My uncle has one like that. Have you seen the kind with the picture that comes out the bottom?

Me: Oh, you mean a Polaroid? Those are fun because you get the printed picture right away.

This conversation continued into different kinds of cameras, how cameras work, and why we have different buttons on the cameras. It was genuine inquiry growing out of lived experience, as Dewey might have described. But it didn’t reside in the classroom inquiry frame. The classroom story line was that students were inquiring through the photostory activity and that I was there to document what they did. They and the teacher were the performers on the classroom stage and I was the spectator, using my notepad and camera to speak to a larger audience. Our roles were clear:

L and I: observing activity with notepad, camera

But Z would have none of that. She was just a sometime participant in the photostory activity and like Bertold Brecht, felt perfectly at home “breaking the fourth wall.”

What are you doing here?

Once I came back to see her and she asked:

Z: Why are you here? What are you doing here?

Even more than with the camera incident, I felt that she was challenging our assigned roles, breaking the fourth wall again. I was the spectator, the questioner. She was supposed to be the performer, the respondent. Who was she, a ten-year-old, to disrupt that established order?

But Z deliberately disrupted, albeit in a gentle way. It was genuine questioning, as Socrates or Mme. Curie might have done. No other student had questioned my presence or activity. They accepted as in the natural order of things that a stranger could be observing them and their teacher, asking questions, and taking notes or photos. Whether they didn’t think to ask or were inhibited from asking, I can’t say, but it’s interesting to note that by the age of ten, we’re nearly all so ready to accept that kind of surveillance. But not Z.

me: I’m here to look at this kind of activity and to see what children learn from doing it. Are you learning from it? What do you think you’re learning?

The standard answers to my question here are as I’ve suggested above: Becoming deeply involved in learning; developing literacy and technology skills; building confidence and learning to be responsible. Many ten-year-olds are able to articulate ideas along those lines. But Z was different.

Well, of course! The day’s activity was framed in terms of “your first memory.” Writing about it and looking at photographs was obviously a way to reinforce and enhance that memory. I just hadn’t thought of ten-year-olds as needing to improve their memories, even though, on reflection, I believe that being able to articulate and express memories is something we do learn how to do. Z had moved to the heart of the activity. Moreover, her compelling oral rendition was her own way to do that improvement.

Was it the fear of having more Zs enter the world that made the Prussian court in 1851 issue a ban on Froebel’s kindergarten idea?

I’m not sure what this all means. Z’s inquiry is situated, reflective, critical, and connected to experiences in her life beyond the school. It’s also rebellious. Imagine a classroom full of Z’s. Her teacher says she’s a handful. Would anything ever get done? Imagine a society of Z’s. Would so many things go unquestioned?

“Ζει” in Greek means “he lives.” It’s a protest slogan referring to the democratic politician Gregoris Lambrakis, whose assassination in 1963 inspired the novel and film, Z. Whatever one might say about our Z’s writing or her ability to focus on the classroom task at hand, it’s indisputable that she lives and that her inquiry is attuned to the world in way that could be a lesson for any of us.I’m of course intrigued to see Z’s final product and wonder where she’ll go next.

2 thoughts on “Part II: Stepping out of a photo story”