Catherine and Bert moved to Houston after World War II. They lived in a four-plex. One of the other three couples was Ralph and Nadine Andrews. Ralph’s brothers were the actors Dana Andrews  and Steve Forrest (look them up if you don’t know them). Ralph sold plumbing hardware and much later provided that for the Acorn Run house.

Mother and Bert’s infant son Charles Holloway Bruce died in February, 1949. They moved to Fort Worth later that year.

They rented a house from Dr. Sim Hulsey at 2541 Stadium Drive. Through him, the family met lifelong friends, Burl and Corinne Hulsey, and their sons, Ben and Price. Karen was born in 1950 and soon the house seemed too small. 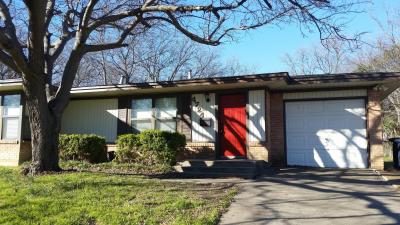 They bought their first home at 4724 Staples Avenue around 1950. I remember seeing in the driveway the gift of a green 1950 Chevy from Mother’s parents in Georgia.

Susan was born in 1954, which provided a reason for another upgrade. They then moved to a new house at 4916 Vega Court West. This was the home I remember best. It was the largest of the three houses, and grew a bit with the incorporation of the back porch. Late in their time there they began to plan the dream house.

After Bert died in 1969. Mother sold the house and moved to Royal Orleans Apartments, where she met Bill. After they married, they moved to 5601 Byers, the home that had been in the Todd family for many years.

Later Mother and Bill downsized to 4230 Clear Lake Circle. They lived there until Bill died in 2009. Shortly after, Mother moved to Austin.

This page has the following sub pages.