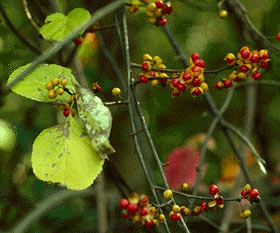 When Celastrus orbiculatus grows by itself, it forms thickets; when it is near a tree or shrub, the vines twist themselves around the trunk. The encircling vines have been known to strangle the host tree to death … All parts of the plant are poisonous. –Wikipedia, Celastrus orbiculatus

Oriental bittersweet continues to spread on Cape Cod, along with poison ivy, Virginia creeper, and English ivy. We now have kudzu, which used to be primarily in the American South.

Climate change is making poison ivy grow faster, bigger and meaner. Rising atmospheric levels of carbon dioxide and higher temperatures are to poison ivy what garbage is for rats, dormant water is for mosquitoes and road kill is to buzzards. –Templeton (2013)

Vines are spreading everywhere–lianas in Panama and air potato in Texas, which grows 8 inches a day. New York is releasing thousands of harmful Asian weevils as the only way to combat the relentless mile-a-minute vine. It’s happening all over the planet. Whether we like it or not, vines are embracing us, our walls and fences, and our trees. 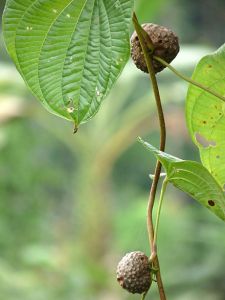 Vines are increasing in many places because of forest fragmentation and habitat destruction. They’re also benefitting globally from increased CO2 in the atmosphere and global warming. Since they sequester less carbon than the trees they replace do, they then contribute to the growth of CO2. It’s a vicious cycle. Trees, but also ferns and other plants are at risk.

If you’ve ever walked through the jungle, you’ll know it can be surprisingly dark down on the forest floor. You see trees soaring up all around. You’re creating a dense canopy overhead. And climbing toward that canopy, snaking up the trees are the vines.

Now it may seem peaceful in there, but what you’re witnessing in very slow motion is a fight to the death: a fight between the trees and their old rivals, the vines. It’s a battle as old as the forests themselves. Now, scientists say the vines are winning. –Science Friday, NPR 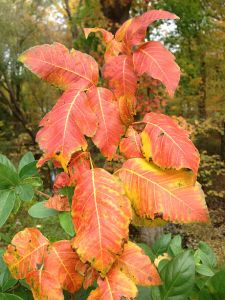 Vines can be quite beautiful. Grape vineyards have developed on the Cape, to what I’d consider to be a good end. Bougainvillea, Campsis (trumpet vine), Wisteria can be beautiful. Lathyrus odoratus (sweet pea) and Passiflora edulis (passionfruit) have delicious fruits. Even poison ivy provides forage for many animals and the fruits are popular with birds (who help spread it around).

Vines aren’t all bad, Maybe we should embrace them back.

But we may have to say good bye to the trees. And they were nice to have around, too.