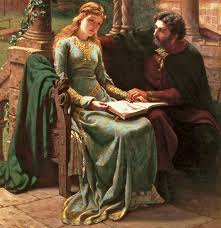 In 1971, I was fortunate to see an excellent play at Wyndham’s Theatre in London. It was Abelard and Heloise, by Ronald Millar. Keith Mitchell and Diana Rigg(!) had the title roles. The play was moving and the acting was superb. I can still visualize scenes, not so much from the stage setting, which was fine, but because the story caught my imagination.

Under the pretext of study we spent our hours in the happiness of love, and learning held out to us the secret opportunities that our passion craved. Our speech was more of love than of the books which lay open before us; our kisses far outnumbered our reasoned words. –Abélard

Over the years I would read whatever I could find by or about Héloïse d’Argenteuil and Peter Abélard, including biographies, fictionalized accounts, children’s stories, poetry, song, and of course the letters themselves. I saw several movie versions, some better than others. I began to learn how the story had inspired copies, re-mediations, satires, and endless allusions in a wide variety of artforms.

Héloïse had seen this coming, with her own perceptive reflections on pictures, letters, talk, and physical presence. For example,

If a picture, which is but a mute representation of an object, can give such pleasure, what cannot letters inspire? They have souls; they can speak; they have in them all that force which expresses the transports of the heart; they have all the fire of our passions, they can raise them as much as if the persons themselves were present; they have all the tenderness and the delicacy of speech, and sometimes even a boldness of expression beyond it. –Héloïse

My obsession with the topic became worse in 2004, when we lived not far from Notre-Dame de Paris, where Abélard had studied and taught. I found an English translation of Régine Pernoud’s book in a used book store. Pernoud lists Héloïse first, which makes sense. Abélard was a great orator and writer, one we might revere even more if most of his works hadn’t been destroyed for his heresies. Yet, Héloïse (a great scholar herself) is the one who makes their story come alive, whether you interpret it as a love story, a theological debate, an example of 12th C patriarchy, or an invention of later writers.  His letters are fascinating to read, but hers leap to the heights of the written art, even in translation from the original Latin.

One thing that comes through in every retelling is the tragedy of it all. There is of course the castration and the subsequent separation of Héloïse and Abélard. But there is also the tangible agony of struggles between possibility and reality, spirituality and desire, trust and betrayal. Their love always entailed suffering with happy moments that became recollections before they were fully realized. Even their son Astrolabe appears as a shadow of a world they imagined, but never had.

Later, when their connection was only through letters, Héloïse seeks a way to share the loss, to find meaning in the emptiness:

Let me have a faithful account of all that concerns you; I would know everything, be it ever so unfortunate. Perhaps by mingling my sighs with yours I may make your sufferings less, for it is said that all sorrows divided are made lighter. –Héloïse

You can read one version of this in Alexander Pope’s poem, Eloisa to Abelard. Eloisa is in anguish over her powerful feelings for Abélard, especially as manifested in her dreams:

Black Melancholy sits, and round her throws
A death-like silence, and a dread repose:
Her gloomy presence saddens all the scene,
Shades ev’ry flow’r, and darkens ev’ry green,
Deepens the murmur of the falling floods,
And breathes a browner horror on the woods.

She realizes that Abélard, now as a eunuch who is free from the “contagion of carnal impurity” cannot return her feelings even if he wants to. And so she begs, not for forgiveness, but for forgetfulness.

How happy is the blameless vestal’s lot!
The world forgetting, by the world forgot.
Eternal sunshine of the spotless mind!
Each pray’r accepted, and each wish resign’d;

Today, one can walk near Père Lachaise cemetery on rue Pierre-Bayle. Bayle was a 17C philosopher. Where Abélard committed the heresy of seeing reason as a path to faith, Bayle advocated a separation between the spheres of faith and reason. He wrote about Héloïse and Abélard in his Historical and Critical Dictionary, a forerunner of the encyclopedias. One can also walk on the rue du Repos, which, were it not for the cemetery wall, would lead directly to where they lie in “repose” at their monument.

Cynics will point out that the monument was placed there in 1817 simply as a marketing ploy to convince Parisians to be buried among the famous; that the bones of the famous lovers are probably at the Oratory of the Paraclete, or the church of Nogent-sur-Seine, or most likely, just lost; that their love, if it existed at all, was no more than an expression of medieval structures of religious oppression, patriarchy, abuse of position, class, and power; and that the famous letters themselves were a literary concoction made long after the actual events.

Abélard would disdain these worldly concerns, and urge the cynics, along with Héloïse to

Strive now to unite in yourself all the virtues of these different examples. Have the purity of virgins, the austerity of anchorites, the zeal of pastors and bishops, and the constancy of martyrs.

But Héloïse would know that “the truth is more important than the facts.” She’d recognize that the Père Lachaise monument shows their eternal love, which endured politics, religion, castration, and even Abélard’s pomposity and coldness. She’d also see that just like Keats’s youth, they can never touch, so encased in granite, their suffering also endures forever.

2 thoughts on “Héloïse and Abélard”