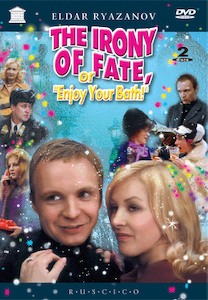 When Stephen lived in St. Petersburg, he learned about the Russian classic movie, Ирония судьбы, или С лёгким паром! (Ironiya sudby, ili S lyogkim parom!; The Irony of Fate, or Enjoy your Bath!) and bought us a dvd of it.

I watched that and also the sequel, Ирония судьбы: Продолжение (Ironiya sudby 2; The Irony of Fate 2). In the sequel, the original actors continue the story, now 30 years later. Can you think of any other movies in which the story line continues that long, with the actors aging naturally?

The movie is a sad love story, but also a farce, with slapstick, rampant misunderstandings, demonstrations of the limits of logic, and still, strikingly honest and insightful comments on the human condition. It shows some of the best and worst of Russia.

It’s easy to understand why watching Ironiya sudby has become a New Year’s Eve tradition in Russia. We followed that tradition here in two parts, the first on New Year’s Day and the second last night. In between, Emily and Stephen prepared a special Russian dinner, including borscht, salade Olivier, and blinis with herring, salmon, onions, and creamed butter.

Zhenya and Nadya were the same as always. He’s 36, a talented surgeon, but nerdy and shy. It’s not clear where his life is going next or what he wants to commit to doing. Nadya is a literature teacher, beautiful, but also somewhat shy and unsure of herself. Together with Galya and Ippolit they stumble through a bizarre, yet oddly-believable, sequence of events in which they learn what matters most.

If you were to hear the plot ahead of time, you’d not only lose some of the fun, but you might wrongly conclude that it’s contrived and silly. Instead, that plot becomes a muted background, which the viewer quickly catches onto. It then serves like the click-clack of a train (here, the faceless architecture of the Brezhnev era), with the real action going on inside the railroad cars.

I especially like the guitar-accompanied songs, which are based on poems by Boris Pasternak, Marina Tsvetayeva, Yevgeny Yevtushenko, Bella Akhmadulina, and others. They fit with the story, and they’re sung in full.

See additional posts of mine on movies.

2 thoughts on “The Irony of Fate”