Colin Powell’s endorsement of Barack Obama for President was a powerful statement from a much-respected figure. It will certainly help Obama’s campaign. But at least as significant was his challenge of Islamophobia:

I’m also troubled by, not what Senator McCain says, but what members of the party say, and it is permitted to be said. Such things as ‘Well you know that Mr. Obama is a Muslim.’ Well the correct answer is ‘He is not a Muslim, he’s a Christian, he’s always been a Christian.’ But the really right answer is ‘What if he is? Is there something wrong with being a Muslim in this country?’ The answer is ‘No. That’s not America.’ Is there something wrong with some 7-year old Muslim-American kid believing that he or she can be president? Yet I have heard senior members of my own party drop the suggestion he’s a Muslim and he might be associated with terrorists. This is not the way we should be doing it in America. 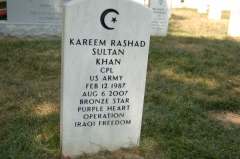 I feel strongly about this particular point because of a picture I saw in a magazine. It was a photo-essay about troops who were serving in Iraq and Afghanistan. And one picture at the tail end of this photo essay was of a mother in Arlington Cemetery and she had her head on the headstone of her son’s grave. And as the picture focused in you can see the writing on the headstone. And it gave his awards, Purple Heart, Bronze Star, showed that he died in Iraq, gave his date of birth, date of death. He was 20 years old. And then at the very top of the headstone, it didn’t have a Christian cross, it didn’t have a Star of David. It had a crescent and a star of the Islamic faith. And his name was Karim Rashad Sultan Khan. And he was an American, he was born in New Jersey, he was 14 years old at the time of 9/11 and he waited until he can go serve his country and he gave his life. [Photo courtesy of Tom Gugiluzza-Smith, August 2008]

Powell is not the first to make this point, but it’s difficult to name another such prominent political leader who has done so. Others, including Obama himself, have focused on the fact that some statements about his ethnic or religious background have been false, not on the bigotry revealed by the very question itself. Ignoring the presupposition of those questions shows a lack of understanding and respect for the US Constitution, which should bring shame on Republican and Democratic leaders alike.