Before going to the conference in Girona on the future of the university, we spent a few days in the Pyrenees (Pireneus in Catalan), mostly in Garrotxa county (camarca) and in Vall de Sau Collsacabra. Collsacabra is a high plateau in the north-east part of Osona county; it’s also called Cabrerès.

Here are some photos; click on any photo to enlarge it. 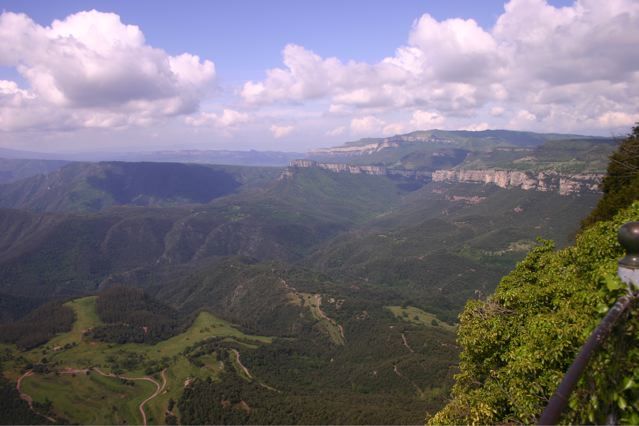 Following a night in Barcelona, we traveled north past Vic and Rupit to a beautiful stone house high on a mountainside. You can see here the view from our room in Mas El Solanot. Notice the tabletop mountains and cliffs, as well as architecture going back to the Middle Ages and even Roman times.

We were staying on the edge of La Garrotxa, which is about 1/4 the size of Champaign County in terms of area and population. It looks very different because of its 40 volcanoes and many cliffs, not to mention the medieval architecture, Mediterranean flora, and red tile roofs.

We traveled to many of the volcanoes in Garrotxa. Here we are climbing up to look at the crater of Volca Montsacopa, in the center of Olot.

The photo on the left is from the Route of Les Tres Colades, with its spectacular basalt cliffs. It shows the results of the cooling of the lava as it flowed towards the site of what is now Sant Joan les Fonts.

On the right is a 12th-century Romanesque bridge in Besalú with a portcullis in center. It was partially destroyed during the Spanish Civil War, then rebuilt in the 60’s.

A view of Rupit and the nearby Salto de Sallent, a 100-meter waterfall. The photo below shows a cascade upstream from the main fall. There was an iron cross embedded in the rock, presumably marking the spot where someone had come too close to the edge. I decided not to go up closer to investigate. But it was impressive to see that the unpaved road crosses the stream above the main fall, going through six inches of water just a few feet from the 100-meter drop. 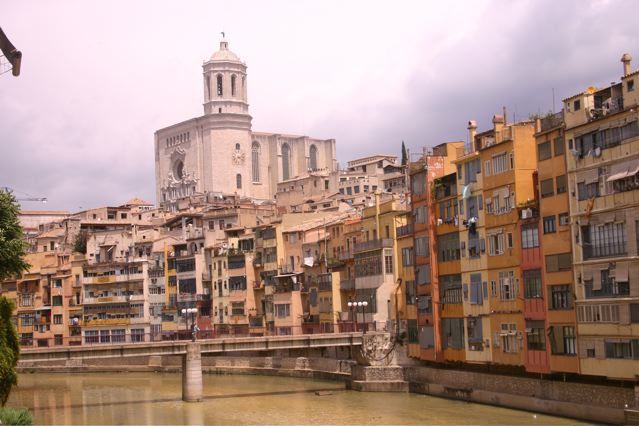 Scenes from Girona, where the conference was held. The cathedral perches on a hill in the center of the beautiful old town (Barri Vell), which lies just across the Onyar River

2 thoughts on “Garrotxa and Collsacabra”