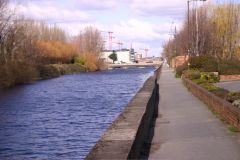 For much of my time here in Dublin, I’ve walked to work alongside waterways. First, it was the Liffey River. Then for a long time it was the Dodder, the second large, remaining, and still aboveground river in Dublin. Sometimes, it has been the Grand Canal. Each of the waterways has its collection of birds, the best being those along the Dodder.

I would often see a grey heron just downstream from the bridge near our apartment. There is also a pair of mute swans, who swim almost always close together, but every few weeks they have a day when they separate by a half mile. There are two main types of gulls, one I think being a Galway gull.

Near where the Dodder joins the Liffey, I occasionally see cormorants. Further upstream mallards are very common and also moorhens, but they’re a little harder to see because they hang out below the brush near the bank. Magpies will also come down to the water at times. 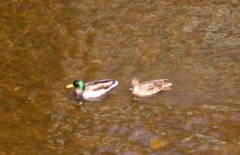 Note: The distant, red cranes in the photo of the walkway aren’t the feathered kind.