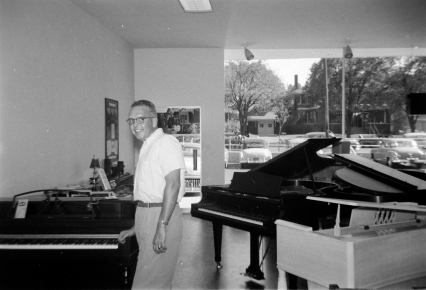 Bertram Bruce, my father, opened Bruce Piano Company around 1950 in Fort Worth. The store later became the authorized Steinway dealer for Fort Worth and provided pianos for performers visiting the Fort Worth Symphony and Opera. We occasionally got to meet those performers in our home.

I worked in the West Lancaster store in the summer when I was 15. I remember learning how to buff hammers, replace bridle straps and damper felts, install new hammer shanks, glue on new plastic key surfaces, and generally, restore most other parts of the piano action. I also helped with refinishing, including converting old uprights into mirror spinets. This was mostly on old uprights, some of which were in sad shape after years of abuse in a bar or humid basement. Many of the operations were challenging at first, but even I could learn them after 88 times.

In the beginning, the store focused on pianos, but later began selling televisions. That led to several robberies in which mostly the new TVs were stolen. This proved to be a great hardship on the small business.

The original location was on Fifth and Calhoun St., in the Binyon O’Keefe Moving Company warehouse. Later the store moved to 8th Avenue near Massey’s, then to the Westchester House where it doubled the space. After that it moved to West Lancaster near Farrington Field. My mother made curtains for the first store and played a crucial role in many other ways to help the young store thrive.

Later, Bruce Piano Co. opened a second store on Pipeline Road in Hurst, with Ken Nance as manager. Harvey MacDougall became the manager of the main store. The final location was on Inwood, off of Camp Bowie Boulevard. Bert then invited his brother Don to merge his business.

I remember Don as being an excellent salesman, but like many good sellers, he was an overly willing buyer, too. Rather than insisting on the cash that the store needed, he’d make trades for a boat, a pool table, and once, a donkey. My father had to rein him in from ordering a truckload of the latest amp or band instrument.

All of this happened shortly before my Dad died on December 12, 1969. Don bought the store after my Dad died and then Harvey took over after Don died. Don, who was two years younger than Bert, also died at age 54, just two years later.  Later Harvey bought Bruce Piano Co.

Bruce Piano Co. was a well-known part of Fort Worth for 35 years, offering everything from used and low-cost new pianos for families who wanted their children to learn music to Steinways for visiting performers. There were also practice rooms used by local piano teachers.

Over the years it also sold sheet music, organs, guitars, band instruments, speakers and amps, televisions, and even once conducted an ill-advised experiment in bagpipes. But changing habits among the public, with the rise of television and music recording devices, meant that piano sales were less and less a central part of middle-class family life. When the Savings and Loan crisis hit in the 1980’s the bank cut off credit for floor planning and the company could no longer survive.

This is a sad story, but I’m proud of what my father accomplished (with ample help from my mother, Don, and others). I’ve also become more aware of what the store did for the community over many years. There’s a piano in our home with a decal showing that it was once on the floor of Bruce Piano Co. I try to play a little each day, and imagine the others whose lives were also enriched by what the store did.